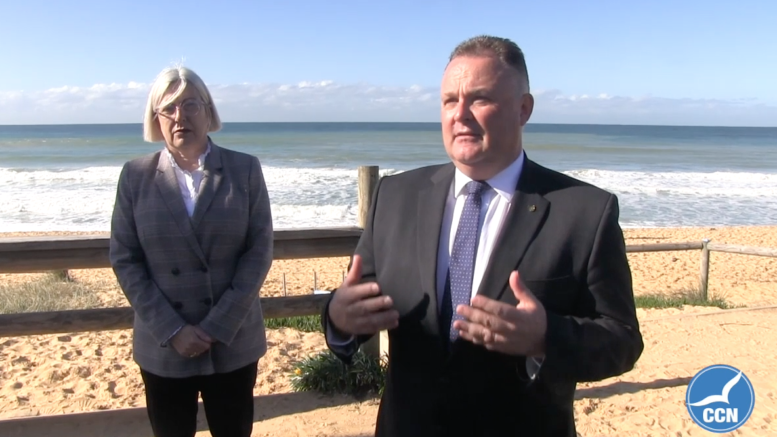 [Video Interview included] The NSW Government has appointed a Local Recovery Coordinator in response to the significant erosion issues at Wamberal Beach.

Lee Shearer APM, a former NSW Police Force Assistant Commissioner, has been appointed to the role. Ms Shearer previously held the role of Central Coast Coordinator-General for the NSW Department of Planning and Environment.

Parliamentary Secretary for the Central Coast and Member for Terrigal Adam Crouch said the appointment would better support the local community, many of whom were forced to evacuate.

“Ms Shearer will build on the work by the Local Emergency Operations Controller, Superintendent Tony Joice to protect lives, minimise damage to properties and clean up the beach,” Mr Crouch said.

“Following the community meeting on Sunday, it’s clear that local residents have no faith in Central Coast Council to prioritise their needs.

“That’s why the Premier, Minister for Police and Emergency Services and myself have appointed Ms Shearer as the Local Recovery Coordinator.

“In addition to dozens of private properties, the hundreds of millions of dollars of public assets along Ocean View Drive must be protected.”

The primary function of Ms Shearer as the Local Recovery Coordinator will be to coordinate consultation between stakeholders, as well as identify and raise emerging issues relating to erosion at Wamberal Beach.

Minister for Police and Emergency Services David Elliott said the appointment of the Local Recovery Coordinator demonstrated the NSW Government’s commitment to supporting the people of NSW following disaster.

“We recognise the significant impact the coastal erosion has had on people’s homes, and on their lives. I would like to thank all the emergency personnel who have supported the Wamberal community over the past few days,” Mr Elliott said.

“Ms Shearer’s appointment will ensure recovery is effectively coordinated and prioritised. Ms Shearer will provide excellent support to the local Central Coast community, bringing local knowledge and an established local network with her to the role.”