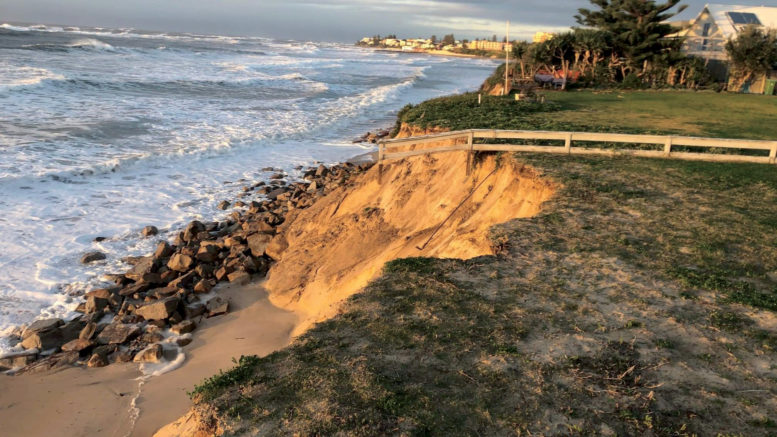 Beachfront residents at The Entrance North and Wamberal have been given direction on what emergency work they can do in the wake of the beach erosion caused by a low pressure system bringing wild weather and heavy seas which hit their sand dunes.

Residents now have assurance that council will not take regulatory action for emergency work carried out, but only at Wamberal and The Entrance North, and the work has to have been designed and approved by a qualified coastal engineer.

The works also need to be certified as not likely to have significant adverse impacts on other land and the work is only that which is reasonably required to protect the property.

The time frame for the works is limited to four weeks.

The decisions were made at July 20’s extraordinary council meeting called to update the community and councillors on the coastal erosion impact resulting from a low pressure system that stretched from Merimbula to Port Stephens.

Cr Chris Holstein put up a 13 point recommendation and the two hour meeting was spent mainly refining the direction to residents about emergency work.

The public screening of the meeting was adjourned at one point as legal advice was sought.

When the meeting resumed, CEO Gary Murphy suggested the following words be added: “that council is not approving such work as it is not the consent authority and not representing that such works will be effective to protect the subject property or not adversely affect other properties.”

This was adopted along with another point explaining that all such works would be carried out at the expense of affected residents.

The 13 point motion was eventually adopted by unanimous vote.

The meeting noted that residents of The Entrance North were invited to a meeting to be held the following night, on Tuesday, July 21, and that it would be a closed meeting.

Council acknowledged the distress of residents impacted by the severe weather.

“The work on the ground is a collaborative approach from all government agencies involved, particularly the SES, Department of Public Works, Department of Family and Community Services, NSW Fire and Rescue, council staff and other key emergency services,” the adopted motion read.

Council asked for a full list of regulatory responsibilities of each of the government agencies involved and called on the State Government to declare a natural disaster, as opposed to a local emergency, as that would mean more assistance for residents and access to funding for council.

Council called for a meeting with the NSW Premier and relevant ministers to fast track and “resolve agreed actions”.

It requested an update from the NSW Government on the Wamberal Beach Management Options: Cost Benefit and Distribution Analysis Report finalised in August 2017, including fast tracking the recommendations from that report.

It also requested a status update on the Coastal Management Plan.

During debate, Cr Greg Best asked why The Entrance North was deemed “not critical”.

Planning Director Scott Cox said it was because homes there were still able to be occupied.

Cr Best says a resident was told not to step outside his back door.

Cr Best questioned the time limit for emergency works at only the next four weeks.

Cr Holstein said he was happy to leave it there as councillors would have to come back if the situation didn’t change and there was a need for an extension.

Cr Holstein said councillors needed to commit to a long-term solution and be prepared to see it through.