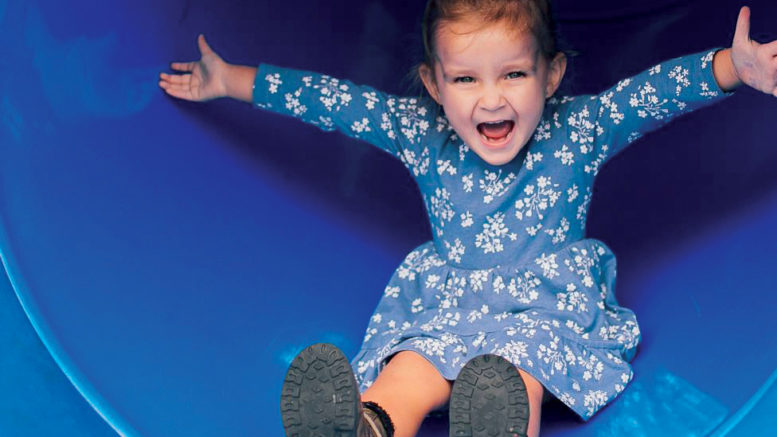 Design, construction and delivery of the new and renewed playspaces has taken place over the past 12 months with the community guided district playspace at Shelly Beach Rd, Empire Bay recently completed and works on the Coast’s new regional playspace, Sun Valley Park at Green Point, poised to begin.

With work at two other district playspaces, Swadling Reserve, Toowoon Bay, and Susan Fahey Park, Copacabana, also about to kick off, there’s never been a better time to be 10 or under.

One Coastie who knows her way around a playground across is Katie Stokes.

Stokes is the Founder and Editor of Playing in Puddles, the Coast’s go-to guide on all things kids.

It’s a one-stop-shop for parents, carers and guardians looking to learn more about what the Coast has to offer its youngest residents and one of its most popular features is its comprehensive review of playgrounds.

The reviews cover everything mums and dads need to know about whether a playspace is right for their family and Stokes and her family have been kept very busy over the past few weeks checking out what’s new and what’s improved.

“Since the holidays started, we’ve been making trips to playspaces around the Coast around five times a week and it’s been great to see so much investment in our local parks and playgrounds,” Stokes said.

“Playspaces are such important community assets.

“They’re a place where families can meet other people, where they can get outdoors and be active, and best of all they’re completely free.

“With so many people moving to the Coast it’s important that our playspaces be a positive and dynamic part of the Coast and I think we’re on track for that,” Stokes said.

Of the new and improved playspaces Stokes said Kincumber’s Pinyari Park was a standout for families with toddlers, while Canton Beach’s Beach Parade Playground and Gavenlock Oval Playground at Narara were great for ages 5 and up.

“Pinyari Park is this really cute nature playspace that’s got a lot of wooden features that are great for younger kids.

“The other two are great for older kids as they have a lot of climbing features which are great for burning off energy,” Stokes said.

But Stokes choices for the best playspaces on the Coast are a tie between Rotary Park at Terrigal and MacMasters Beach Playground.

They’re her family’s old faithfuls and she said they ticked all the right boxes.

“Rotary Park is the full package.

“It’s great for all ages, is accessible to families with special needs and has great amenities.

“MacMasters Beach is a little quieter but it’s another great all ages park and is in such a beautiful spot directly opposite the beach,” Stokes said.

With so much work underway to improve playspaces on the Coast, Stokes said the only thing the region was missing was a dedicated regional playspace and she’s hopeful pipeline projects like Sun Valley Park and Gosford’s Leagues Club Field will remedy that.

With council’s draft Central Coast Playspace Strategy now on public exhibition residents are being encouraged by council to have their say on what the future of the Coast’s almost 300 parks and playgrounds should look like.

“The draft Central Coast Playspace Strategy is currently on public exhibition and we encourage the community to jump online to review and submit feedback,” said Council’s Environment and Planning Director, Scott Cox.

“The strategy was developed to set consistent guidelines and goals for the development and sustainable management of playspaces across the whole Central Coast region.

“The Playspace Strategy also ensures future playspaces are appropriately located with equal distribution across the region, and are well designed, inclusive and will further develop our network of quality playspaces to provide a range of play experiences catering to the varied needs of our community.

Mayor Lisa Matthews is also proud to see an abundance of new playspaces.

“Playgrounds are important spaces, through which the community builds social networks and keeps active.

“Effectively designed playgrounds and parks encourage play at all levels and offer a place for children to learn, exercise, reflect, run, explore and take safe risks; they are places where children can meet with friends and have fun with family members,” Mayor Matthews said.

Submissions can be made on the draft Central Coast Playspace Strategy via the Your Voice Our Coast website until August 14.