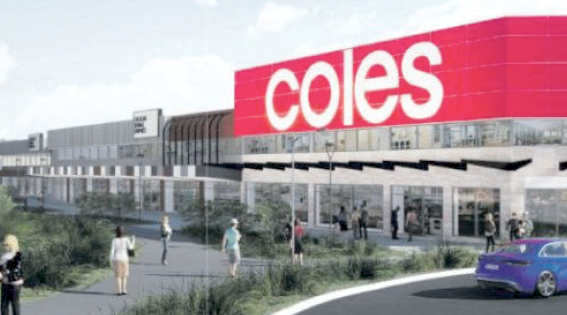 The Central Coast Local Planning Panel has deferred a decision on a revamp of the West Gosford Shopping Centre, requesting more information on proposed landscaping for the centre’s carpark and how that might impact on parking spaces.

But the panel was satised proponent Mintus Properties had adequately addressed concerns regarding the impacts a proposed Hungry Jack’s outlet might have on nearby residents.

Despite 43 submissions having been received, most of which expressed concerns about trafc, noise and visual impacts of the 24-hour drive through fast food outlet, panel members seemed content with a 2.7m acoustic wall and landscaping proposed by the developer as a solution.

Long-time residents of the three townhouses immediately adjoining the proposed Hungry Jack’s site beg to disagree. Colin Douglas addressed the panel just before its deliberations on June 23 on behalf of the residents of the townhouse complex and said a Noise and Impact Statement had failed to adequately address impacts on residents.

He said sleep disturbance, possible anti-social behaviour and lighting pollution needed to be investigated further. “My wife Irenee and I have lived here for 16 years,” Douglas told Coast News. “Part of the reason we bought here was the proximity to shops and transport and we are all in favour of seeing the shopping centre upgraded.

“We have seen it go from a very prosperous centre to a shell and welcome revitalisation. “But we feel no consideration has been given to nearby residents with the inclusion of a 24-hour drive through Hungry Jack’s.” The restaurant would be sited just metres from the Douglas’s home. “

We are horried at the noise and smell which this would generate 24 hours a day,” Douglas said.

“The proposed acoustic wall will block sunlight from our gardens and restrict daylight entering our ground floor rooms and will do little to mitigate noise.” Douglas said odours from the restaurant would impact residents and he was not satised waste management had been adequately addressed. He said he felt his concerns had not been taken on board by the panel.

“I got the impression I was there to be tolerated,“ he said. His wife Irenee said they were also concerned about proposed lighted signage which could be as high as eight metres and would shine into their bedroom window, while neighbour Shirley Mitchell said the possibility of anti-social behaviour attracted by a 24- hour drive through so close to residential homes was also a major concern.

But town planner Jonathon Wood from ThinkPlanners spoke to the panel on behalf of the applicant and said while he “fully appreciated” the concerns of residents, an acoustic report had shown impacts would be acceptable given the provision of the acoustic barrier between the carpark site and the townhouses.

He said potential landscaping which could include an evergreen hedge would provide further noise protection as well as visual impacts and conditions imposed on the development application would limit lighting spill. The proposed three-stage redevelopment would see major alterations to existing buildings and the addition of a childcare centre as well as the Hungry Jack’s.

Stage one would see the fast food outlet constructed, with 50 indoor seats and a drivethrough, catering for 16 cars. Stage two would see alterations, including demolition of existing walls and t-outs on the rst oor, converting existing ofce space to an 81 place childcare centre and a gym and Stage three would see major renovations to the ground level, including the demolition of the existing tavern, re-sheeting and reconguration of the carpark and the introduction of new shade sails.

The application is expected to be considered again at the panel’s next meeting on August 6.