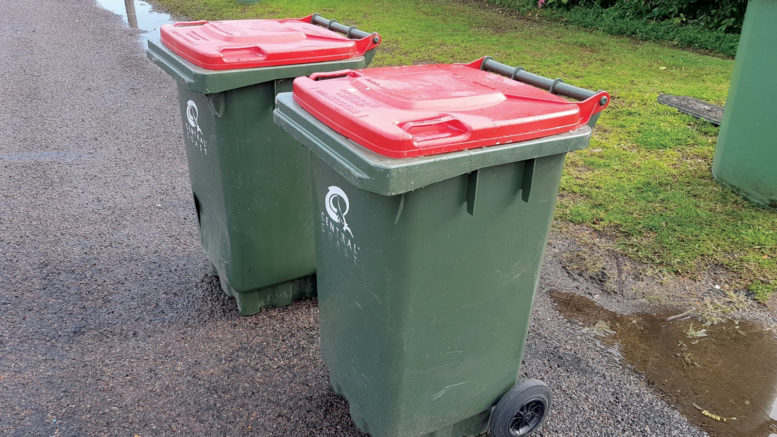 Councillor Greg Best has once again failed to convince Central Coast Council to issue an assurance that red bin collections will definitely not be scaled back from weekly to fortnightly.

Cr Best first raised the issue in July last year, prior to the public exhibition of the Central Coast Waste Strategy, which makes numerous references encouraging the reduction of red bin pick up cycles as an environmental and cost saving device.

At that time, his motion for an assurance the red bin service would be reduced was knocked back.

He sought the same assurance at the latest Council meeting (July 13), asking councillors to “put ratepayers out of their misery” by ruling out a reduction in services.

“Raising rates by more than $4M last week and now to leave open the prospect of a significant reduction in the red bin services is an outrage,” he said.

He told fellow councillors that a number of other councils had already moved to fortnightly collections and said ratepayers would “not in any way” accept such a reduction.

He said Council should acknowledge the pressures felt by the community throughout the coronavirus pandemic.

“This should not be magnified [by] escalating public health concerns through emissions from pungent red bins,” he said.

“I can only imagine if a transparent and open question were crafted in a genuine poll to our community asking them, ‘Would you be happy with Council reducing your red bin pick-ups by 50% and providing you with a complimentary can of air freshener?’ The answer would be outrage and an unequivocal no.”

Cr Louise Greenaway said she had not heard a single person express concern over the issue, and she would abstain from the vote.

“We should be saying what we will do, not ruling things out,” she said.

Director Roads Transport Drainage and Waste, Boris Bolgoff, told councillors that if there were to be a change to bin collection systems in the future it would come to councillors for consideration first.

Bolgoff said if the Food Organics and Garden Organics (FOGO) system were to be adopted in the future, it would see food waste allowed in green bins, which would be collected weekly.

Deputy Mayor Jane Smith put up an amendment that councillors consider the matter when the draft Resource Management Strategy comes back to Council.

Cr Smith refused a suggestion from Cr Doug Vincent that her amendment include a statement that at this time the Council has no desire to get rid of weekly collections.

She said her amendment was about getting a report from the professionals and debate on the matter “diminished” the work of staff.

Her amendment was successful, with Councillors Rebecca Gale, Best, Chris Burke, Lisa Matthews and Jilly Pilon voting against it.

The amendment became the motion and was carried with the same voting numbers.

People have already taken to Facebook protesting any change in red bin collection services, with multiple posts on the Tell Council page forecasting an increase in illegal dumping if red bins were to be collected fortnightly.

Some people said red bins would need to be bigger if collected fortnightly and some even went so far as to suggest dumping rubbish outside Council chambers in protest.

Charges across the LGA need to be equitable

Charges should be waived