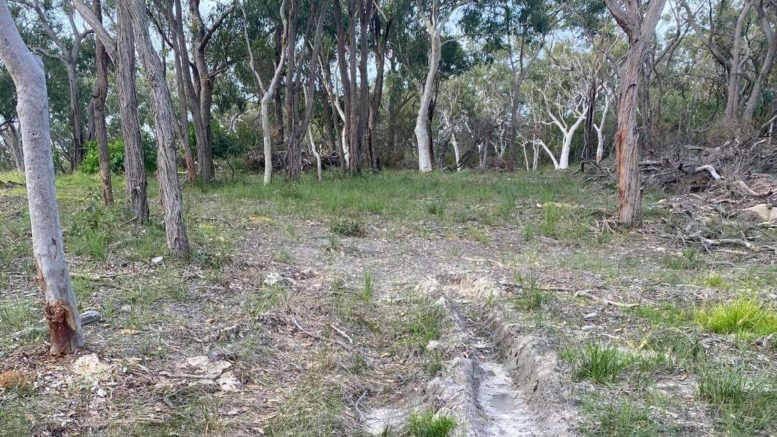 The bulldozed land at Kariong

Mystery surrounds the unauthorised clearing of a tract of land at Kariong owned by Darkinjung Local Aboriginal Land Council (DLALC) and earmarked for a controversial 70-home housing development.

The proposed development, adjacent to environmentally sensitive and culturally significant land on Woy Woy Rd, has been the subject of heated debate in recent weeks and crossed its first major hurdle with the Joint Regional Planning Panel determining last week it has strategic and site specific merit.

“My heart just sank when I saw the carnage in an area well known for its endangered plants and animals,” he said.

“Someone had taken some kind of large machinery and just ploughed through the extremely sensitive bushland.

Cassar said several hundred listed koala habitat trees had been knocked over and piled up as if ready to be burned in an act of “mindless environmental vandalism”.

DLALC Chairperson, Matthew West, said it had come to Darkinjung’s attention some time ago that illegal clearing had occurred at the site.

“Darkinjung wishes to make it clear that at no time did we authorise any internal or external party to begin land clearing at this site,” West said.

He said Darkinjung had been falsely accused of being responsible for illegal clearing perpetrated by trespassers.

“As a result, Darkinjung has instigated a legal investigation to determine who the person or entity responsible for the illegal land clearing is in order to see justice served,” he said.

Meanwhile, West said last week’s decision by the Regional Planning Panel was a “significant step on Darkinjung’s journey to determine its own future for its lands”.

“It’s crucial for our community that our lands play an active role in ensuring a brighter future not just for our people, but the whole Central Coast community,” he said.

“This proposal would preserve more than half the site in its pristine ecological state.

“This conservation land will also act as a significant buffer between our development footprint and the Bambara Aboriginal Cultural landscape.”

But with a planning proposal yet to be prepared and submitted for a Gateway determination, Cassar said the fight was far from over.

If supported at Gateway the proposal would follow the usual planning proposal process including more detailed studies (if required), agency, Council and community consultation.

Cassar said the 5,000 member CEA had received notification from Aboriginal stakeholders that the land is “extremely culturally significant to them” and would continue to oppose the development.

“You can already see the endangered ecological plant communities known as hanging swamps clinging on to life next to the land that has been ravaged,” he said.

Cassar claimed the panel had made its decision without having any knowledge of the threatened flora and fauna on the site, bushfire hazards, or what the Central Coast community thinks of the proposal.