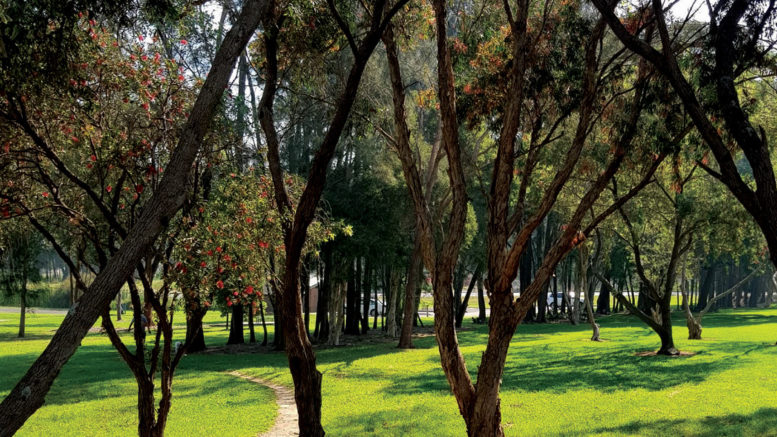 Central Coast Council has revealed its plans for the redevelopment of Sun Valley Park at Green Point, but residents are not entirely happy with the proposal.

In particular, residents are concerned over the proposed removal of 10 trees, the relocation of the existing toilet block and the removal of the well-used graffiti wall.

Although Council says its preliminary consultation involved engagement with schools, childcare centres, seniors’ groups, people with disabilities, the general community and other relevant community organisations, Green Point Residents’ Association said it had not been involved in any discussions before the concept plan was developed.

“We have put in a submission to Council outlining our concerns, but have received no response,” Association President, Johan Luidens, said.

“We have concerns around what effects the planned flying fox, which appears to be crossing the nearby creek, will have on the waterway and its inhabitants.

Environmentalist Joy Cooper said her main concern with the proposal was the plan to remove 10 trees from the site.

“Why does this always have to be the case?” she said.

“There were trees recently removed on public land, on the road reserve, for the nearby subdivision and there was the huge clearing with that subdivision.

“Surely the design could be created to preserve the trees which are already there; those trees are a green haven for the remaining wildlife.”

Cooper said the proposed relocation of the existing toilet block seemed unnecessary, with a refit of the toilet block more financially viable.

Plans to remove the existing graffiti wall were also problematic, she said.

“Have those who use the legal graffiti wall been consulted?” she said.

“The wall is very well used for graffiti and by other artists.

“Gosford Council led the way with the installation of that wall and it is very well used.

“Has there been any consideration as to where these artists will legally create their work?”

But a Council spokesperson said the concept plan was intended to provide a safe, functional and inclusive regional play space with play equipment, park furniture, connective pathways, landscaping, shade and fencing as well as an upgrade to the existing amenities building, basketball courts and carpark.

“During two rounds of engagement held late 2019 and early 2020, the community told Council what they wanted to see in the plans and designs,” the spokesperson said.

“This extensive feedback was used to create the concept plans and Council is now progressing planning for construction to start in September.”

The spokesperson said following an extensive assessment of the trees across the site, 10 trees had been identified for removal due to their poor condition, safety risk or location.

“As part of the project, Council will be undertaking additional landscaping works to offset the tree removal and improve the aesthetic and environmental value of the site,” the spokesperson said.

“The existing public amenities were assessed during the preliminary stages of the project and it was determined that whilst the ageing infrastructure is highly utilised it does not provide any accessible toilet facilities.

“To ensure Council is meeting the needs of the community a new toilet block has been designed including a new accessible adult change facility, as well as unisex accessible toilet and male and female ambulant toilets.

“The upgraded carpark will also provide a Disability Discrimination Act compliant path of travel to the new amenities building with accessible parking and bus drop/off pick up bay within close proximity.”

The spokesperson said the graffiti wall was being demolished as part of the basketball court upgrade.

“A new graffiti wall will not be included within the playspace due to conflicting user needs with multiple user groups regularly visiting the site.”