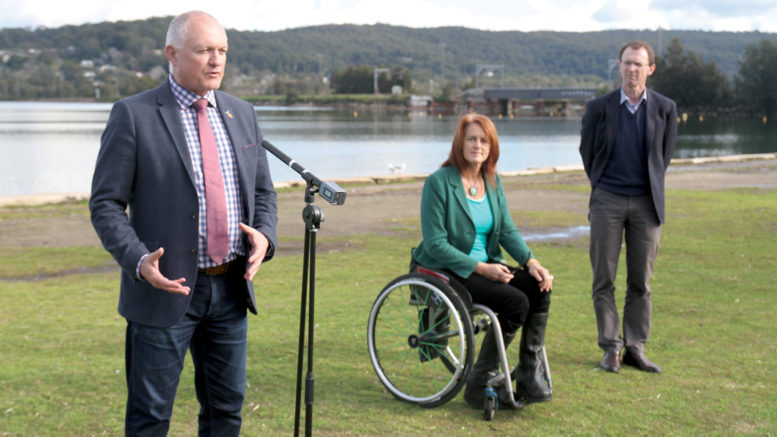 Labor MPs on the Central Coast have claimed that money meant to support NSW councils with extra costs of amalgamation, including Central Coast Council, has instead been redirected to councils in Coalition-held electorates which didn’t undergo amalgamation.

Shadow Minister for Central Coast, David Harris, said it was totally unacceptable that more than $100M of the $250M Stronger Communities Fund Tied Grants program had been redirected.

“Central Coast Council has missed out on funding which could have fast tracked infrastructure and better supported the amalgamation of the Gosford and Wyong Councils which was forced on ratepayers in a completely undemocratic way,” he said at a press conference on July 13, where he was joined by Member for Gosford, Liesl Tesch, and Member for The Entrance, David Mehan.

“We know that the cost of all the amalgamations is anywhere between $200M and $250M.

“We are calling on the NSW Government to immediately restore the funding and re-allocate it to eligible councils like the Central Coast.”

Harris said Labor would be pursuing the matter when State Parliament returned in the last week of July and that it has been referred to the Independent Commission Against Corruption and the Auditor General.

Parliamentary Secretary for the Central Coast, Adam Crouch, said the Government committed $10M for infrastructure and $10M for amalgamation costs to the newly-merged Central Coast Council in 2016.

“Every single dollar has been delivered to Council,” he said.

“In the past two years alone, Central Coast Council has received $104M in grant funding from the NSW Government.

“This is more than almost any other council in NSW.”

Harris claims that some of that money came from different grant funding programs, other than the Stronger Communities Fund Tied program in question.

The Entrance MP, David Mehan, said the redirection of funds was a disgrace and the Central Coast has been short-changed again by the State Government.

“It’s a rort of monumental proportions.

“A promise was made that money would go to amalgamated councils but now we know that money went to councils, by and large, in Liberal held seats that didn’t undergo amalgamation,” Mehan said.

He said in a media release that a freedom of information request into the grants program was refused, despite State Parliament ordering the NSW Government to turn over about 3,000 pages of documents into the grants, including more than 4,700 references to the program.

Meanwhile, the Public Accountability Committee of the NSW Parliament has recently established an inquiry into the integrity, efficacy and value for money of NSW Government grants programs.

Committee Chair, David Shoebridge, said the inquiry was about bringing greater transparency and public accountability to a range of government funding schemes, including the well publicised Stronger Communities Fund.