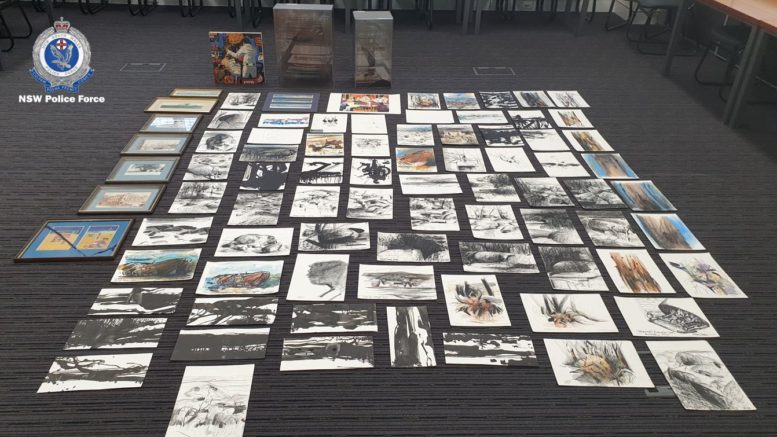 Anthony Jones, the Maitland cleaner accused of stealing $160,000 worth of artworks, equipment and personal effects from the studio of deceased artist, Patrick Carroll, has pleaded not guilty to larceny.

He was arrested in May as part of an investigation into the disappearance of 87 of Carroll’s works from his studio at The Entrance’s Ebbtide Mall, following a deliberately lit fire that ultimately claimed Carroll’s life in October, 2019.

Strike Force Zorianna was established to investigate the suspicious fire.

During the course of the investigation they received information about the stolen goods, with their inquiries leading them to Jones, who was contracted to assist with cleaning Ebbtide Mall during its decontamination and structural assessment.

Police allege that the stolen goods, which included paintings, sculptural pieces, sketches, watches, trophies and a camera, were uncovered during a search of Jones’ Maitland address, along with an air rifle, pen gun, electronic stun gun, ammunition and prohibited drugs.

Jones was charged with 10 offences.

He pleaded guilty to the drug, unauthorised firearm, unregistered firearm and ammunition charges.

He pleaded not guilty on all other charges.

His case was adjourned and will return to Wyong Local Court in August.

The Entrance man charged with 17 offences