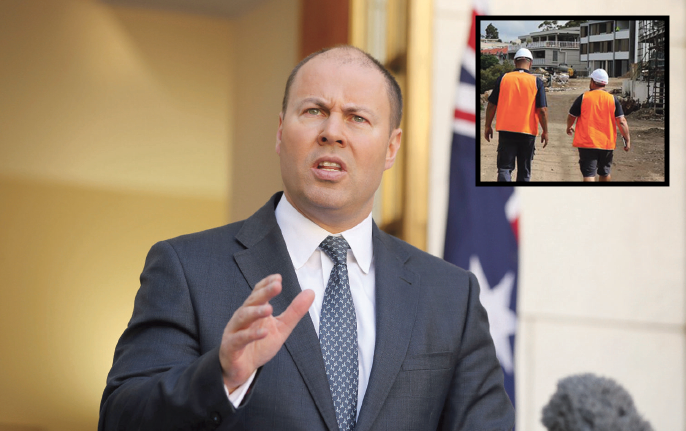 [Editorial by Josh Frydenburg] Since JobKeeper was announced on the 30th March it has provided a massive economic and psychological boost to the nation.

At a cost of $70 billion it is supporting 960,000 businesses and 3.5 million workers or around 30% of the pre-COVID private sector workforce. It is the single largest fiscal measure in Australia’s history. Legislated for 6 months, Treasury have now completed a review at the midway point of the program.

The review concludes JobKeeper is a “proven delivery mechanism to deliver widespread support at scale” and that it has met its objectives to save businesses and jobs; maintain the formal connection between employer and employee; and provide necessary income support. With the labour market remaining weak, Treasury suggest there is a “strong case” for continuing the program with some modifications.

This is what the Government will do. The report details how the COVID-19 crisis is expected to see employment levels decline by 5% between the March and September quarters which is a faster and higher rate than that experienced in the recessions of the 1980s and 1990s.

Between February and May, more than 2 million people went from employment to either being out of work or working fewer, or in some cases, zero hours. In this deteriorating economic environment, JobKeeper’s flat fortnightly $1,500 payment has been a lifeline for many.

In the words of one small construction business “JobKeeper ensured we stayed breathing,” while another in the food services sector said “JobKeeper is the only reason we are open today.”

Using a range of data, including single touch payroll information collected by the ATO and high frequency ABS surveys conducted during COVID-19, Treasury found businesses receiving the payment had on average a decline in turnover in April of 37% compared to the same month a year prior.

Job separations between employers and employees in these businesses had doubled as restrictions were implemented in the period prior to JobKeeper. Following the introduction of JobKeeper, payroll jobs started to stabilise after an 8.1% fall over the four weeks to mid- April.

The sectors with the largest number of JobKeeper recipients were those in professional services, construction, and healthcare and social assistance. Females comprised 47.1% of total recipients, slightly higher than the 44.9% they make up of private sector employment. Sole traders represented 40% of the organisations receiving the payment but only 12% of individual recipients.

The program was demand driven and while some eligible businesses chose not to apply, only 1 in 10 of these businesses cited complexity and insufficient cash flow as the reason for not doing so. Consistent with its core objective, ABS data found 44% of businesses surveyed said JobKeeper influenced their decision to keep on staff, even if hours were reduced.

It was a conscious decision to introduce a flat $1,500 fortnightly payment as it enabled the money to be distributed as quickly as possible using existing systems. However, one of the consequences of the flat payment equivalent to the minimum wage was that some recipients were receiving more under JobKeeper than they did pre-COVID.

The Treasury review finds that around a quarter of JobKeeper recipients saw their income increase by an average of around $550 – the same amount of the additional coronavirus supplement paid to JobSeeker recipients. While the income increase of $550 is significant, it’s important to acknowledge that this is calculated based on the income a recipient was receiving from their JobKeeper employer and does not take into account any income that they may have lost through losing a second job.

The review found secondary jobs comprised 39% of all jobs lost since March and a number of recipients particularly those that are part-time or long term casuals receiving JobKeeper may have had second jobs. The Government is introducing a second tier payment as part of JobKeeper 2.0 to better reflect the pre- COVID-19 incomes of recipients. In recommending that JobKeeper be continued, Treasury did point out that it should remain a time limited program, as it can create some disincentives which become more acute as the economy opens up.

While JobKeeper itself does not inhibit an employer from making an employee redundant, it could restrict labour mobility and people switching jobs. As the JobKeeper payment does not move with the staff member, it can discourage them from moving to another firm that is doing better. In extending the JobKeeper program to March 2021, only businesses that continue to see their turnover fall below the threshold will be eligible for continued support.

This will ensure JobKeeper remains targeted to those that need it most. While not every one of these businesses will necessarily make it to the other side, by tapering the payment and extending the JobKeeper program, we give these businesses the best chance of remaining viable. JobKeeper has been an enormously successful program. It has helped keep people in jobs and businesses in business. Given the scale and size of the economic shock hitting the Australian economy, the JobKeeper program will be continued providing critical support for those who need it most.

This article was printed with permission from the Federal Treasurer. The article appeared first in the Australian Financial Review.