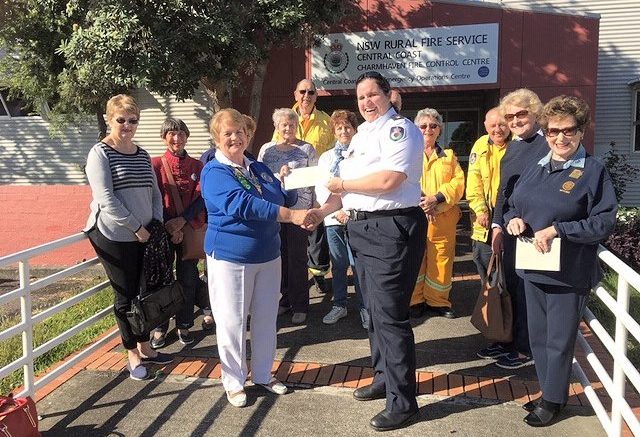 “The Fire Service is very pleased to receive this donation.

“The funds will be used specifically for the purchase and fitting of reversing cameras for at least 10 fire vehicles, which will assist in improving the safety of trucks and firefighters,” Campbell said.

According to Campbell, Charmhaven RFS is a support brigade, with its members a part of the 2,488 strong volunteers across the Central Coast Fire District’s 57 brigades.

“During the recent catastrophic fires, our volunteers travelled to all parts of the state and in very tense situations, provided whatever support was needed.

“They are the lifeblood of the service,” Campbell said.

Arthur explained that Inner Wheel clubs raised funds nationally to support those whose lives were devastated by the fires, and Inner Wheel in Germany raised substantial funds which were earmarked to support the Australian Rural Fire Service and its firefighting heroes.

“The donation from Inner Wheel Germany reflects the truly international bonds and friendship which exist among members throughout the world, particularly in times of national disasters,” Arthur said.

Callum driven to help those in need