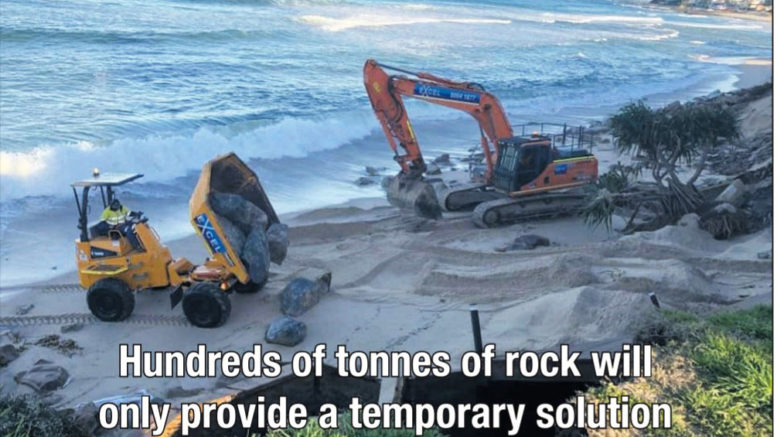 More than 900 tonnes of basalt rock and 220 tonnes of sandstone has been placed in front of homes along The Entrance North Beach as part of Central Coast Council’s emergency erosion remediation works.

Rock placement and emergency protection works started on Friday, July 24, and was completed by Sunday, July 26, and included maintenance of pre-existing ad hoc protection structures at the beach.

However, there has been further erosion to yards and properties south of 15 Hutton Rd, due to powerful sea swells from the second low pressure system in the past week.

A Council spokesperson said no houses were under immediate threat and crews were undertaking repair works which continued until the high tide on the afternoon of Tuesday, July 28.

All works have been in accordance with the expert coastal engineering advice received from Royal Haskoning and directions from the Local Emergency Operations Controller and state government agencies.

A pozitrack machine, which can operate during higher tides, was used to assist the dump trucks with the movement and placement of rocks to stabilise the base of the sand escarpment south of Hargraves St.

A meeting at The Entrance North on July 22 advised residents about the work to provide immediate protection to the base of the erosion scarp.

A Council spokesperson said work over the weekend firstly focused on 50m of the most vulnerable coastline and other sections of the coastline were completed in stages.

“Weather and beach conditions are still being monitored carefully and Council continues to work together with residents and the State Government to manage coastal erosion.

“Our teams are monitoring coastal infrastructure, beach access points, coastal lagoon levels and are on standby to assist with the removal of any fallen trees due to the winds,” a Council spokesperson said.

All access to the beach has been blocked as conditions are not safe.

Beachfront resident, Paul Green, who lost about 10m of his land through erosion, said Council had done a good job in front of one particular property which was dangerous, but he thought more long-term work was needed at The Entrance North.

“The rock that’s been placed there now will see us through the next few days of bad weather and the swell that will bring, but it’s not enough for long-term protection against erosion,” Green said on Monday, July 27.

“The big easterly swells destroy North Entrance as the sand is washed down into the channel, and the big southerly swells used to bring the sand back on to our beach, but that’s not happening now because the sand is getting clogged up at the breakwall down at The Entrance.

“You can’t build something like a breakwall and not have a consequence somewhere else,” he said.

Mehan noted that further protection to the beach would be possible once dredging of The Entrance Channel commenced, after Council resolved its licensing difficulties with the Environment Protection Authority.

“I will continue to work with Council to assist in obtaining any approvals needed to protect The Entrance North and to get dredging of the channel sooner rather than later,” Mehan said.