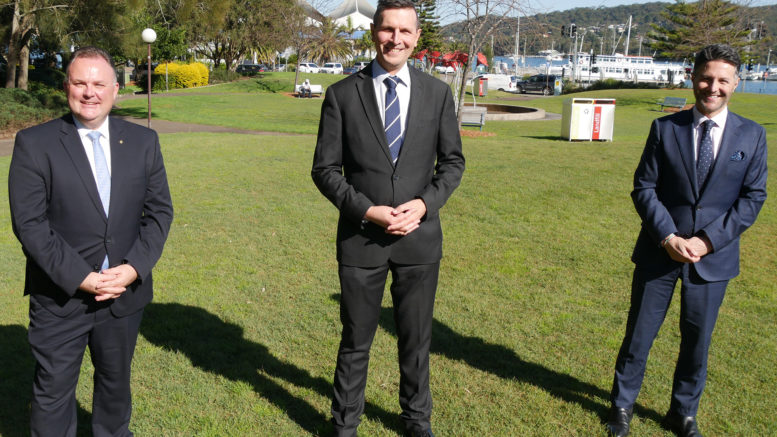 Residents wanting to lodge a development application (DA) with Central Coast Council can now do so from the comfort of their own home, with the official launch on July 1 of the State Government’s new ePlanning initiative.

It has been touted for months, but the new streamlined online lodgement system is now firmly place, with Minister for Customer Service Victor Dominello joining Parliamentary Secretary for the Central Coast, Adam Crouch, and Council CEO Gary Murphy in Gosford for the announcement,

Crouch said ePlanning would see an end to the days of having to fill in piles of paperwork and travel to a council building to lodge a DA.

“This transforms the way people on the Central Coast access the planning system,” he said.

“The experience from some councils that have already adopted the online system shows that DA processing times are being slashed by more than half.

“With significant future population growth in our community, it’s important that we all work to make the planning process as hassle-free, transparent and simple as possible.”

Dominello said there would be a transitional stage for the next six months as Council starts accepting and processing DAs, complying development certificates and post-consent certificates via the NSW Planning Portal.

From December 31 it will be mandatory for all of these applications and PCA appointments to be completed on the Portal.

“This initiative puts the customer at the centre of the DA process by eliminating paperwork, allowing applications to be submitted anywhere in real-time, avoiding delays and boosting transparency,” he said.

“It is far safer in this COVID environment and one of the most important elements is transparency.”

Dominello said increasing numbers of people had become more online savvy during COVID-19 but that those who struggled with the technology could be walked through the process at Council chambers.

Central Coast was one of the first councils to put its hand up to be part of the new system.

Murphy said Council staff had embraced the new procedures and the system had gone online prior to the July 1 deadline.

“We could see this was the way of the future and we wanted to be ahead of the game,” Murphy said.

“This will cut out a lot of paper and the process will be a lot better for the customer.

“People can go online to the portal and see the status of their application so the visibility of seeing where things are up to is very good.

“We also want people who might be uncomfortable with eplanning to know that we will help them through the process.”