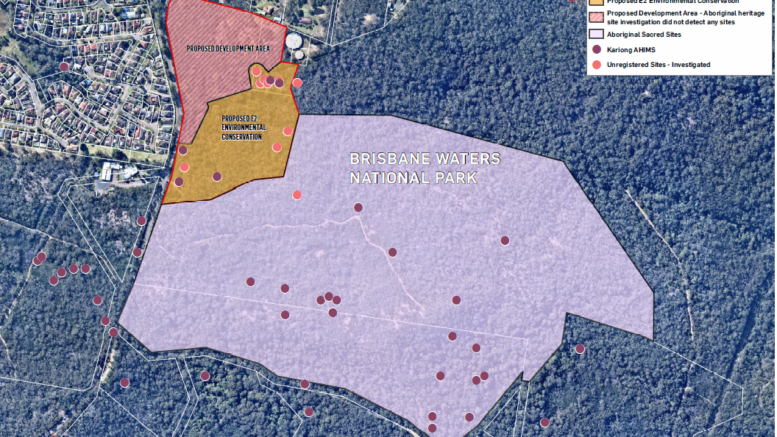 Controversy continues to rage over a proposed housing development on sensitive land at Kariong, with Coast Environmental Alliance (CEA) founder, Jake Cassar, who is opposed to the project, hitting back at claims of racism as well as Darkinjung Local Aboriginal Land Council (DLALC) saying an independent investigation has shown no culturally significant sites will be impacted.

Cassar maintains the development would see largely untouched bushland on Woy Woy Rd cleared for 70 properties in the proximity of the Kariong Sacred Lands, an area CEA pushed for many years to have protected due to its rich Aboriginal cultural heritage and sensitive flora and fauna.

He said a post made on social media by DLALC Senior Education and Tourism Officer Kevin (Gavi) Duncan (incorrectly referred to as an Executive of the council in our last issue) said: “The Central Coast Aboriginal community should rally together to counter the racist attacks by Jake Cassar and his redneck followers”.

“If our community group is racist for rallying together to protect Aboriginal engraving sites, then the world has truly gone mad,” Cassar said.

Cassar said the group was made up of locals from all different backgrounds, including people from the Aboriginal community.

While he said Duncan had later personally apologised for and removed the post he had not made the apology public.

“As a member of the local Aboriginal community, I must say that this division is not good at all,” she said.

“Of course DLALC should have the same opportunities as anyone else to try to develop land, but the broader community should have the right to oppose it without being accused of being rednecks or racists.”

Carlson said she found the development plan “distressing” given the “irreplaceable cultural heritage in this special place”.

She said the development would also be “an absolute bushfire trap” and urged DLALC to shift its focus to “more sustainable methods of economic growth”.

But DLALC Chairperson, Matthew West, said an independent investigation under the NSW Government’s Aboriginal Heritage information scheme had so far found no culturally significant sites will be impacted by the project.

He said Darkinjung had conducted an independent heritage investigation of the site via two groups of Registered Aboriginal Parties (RAPs), which had found no evidence of cultural heritage on the land earmarked for low density housing on the Kariong site.

“Where significant cultural and heritage sites have been identified, a 20m buffer between them and our intended development footprint has been implemented,” he said.

“Sustainably safeguarding our lands for the future while realising the community, economic and social aspirations we have for our people and the broader population, is at the heart what we are trying to achieve.

“The heritage survey of the Kariong site will be publicly exhibited in coming weeks.”

The Darkinjung proposal is currently with the Hunter and Central Coast Regional Planning Panel for determination on its merit.

He urged anyone opposed to the development to contact Member for Gosford, Liesl Tesch, and State Planning Minister, Rob Stokes.