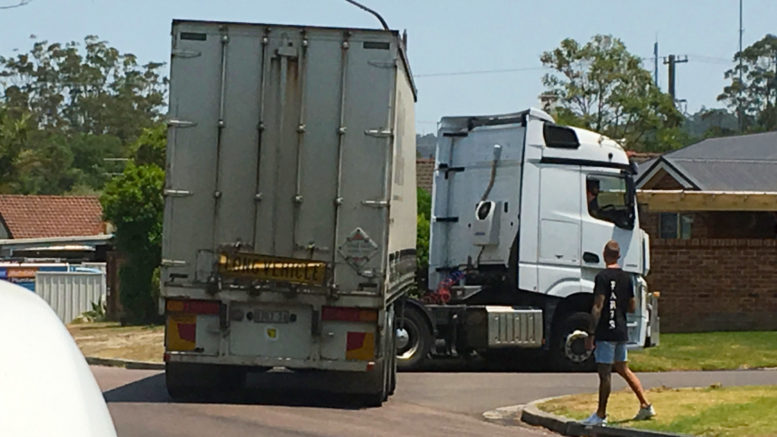 One of the trucks turning into Nellie Rd from Burns Rd to avoid the 3m low level rail bridge at the bottom of Burns Rd.

New bigger and bolder signs will be erected at approaches to Burns Rd, Ourimbah, to warn truck drivers of a low clearance underpass.

Residents in Burns Rd and surrounding streets are continually faced with trucks trapped by a 3m clearance underpass on the shortcut from the M1 Motorway to Enterprise Dr.

“This has been an ongoing issue for many years, with an average of one truck every week using Burns Rd as a shortcut to Berkley Vale and Wyong Rd, and we think the GPS leads them there,” said a secretary of Ourimbah Region Residents Association (ORRA), Julie Lawrence, who lives in that area.

Streets in this residential area have weight and height limits and there are warning signs, but residents say that they are poorly placed and too small.

“We’ve been trying for years to get bigger and better warning signs before Burns Rd on the Pacific Highway and residents have been writing and phoning Council, but it made no difference,” Lawrence said.

She said The Entrance MP, David Mehan, and Councillor Kyle MacGregor, were instrumental in assisting residents to get proper signage.

The big new black and yellow signs warning of the low clearance underpass and an alternative route will be placed in several prominent positions on the freeway side of the highway and at Burns Rd.

In a letter to Mehan, Howes St resident, Rob Bowcock, said that once trucks entered Burns Rd there was no safe place for them to turn around and they were trapped by the 3m high rail underpass at the end.

“The issue is becoming worse with the introduction of heavy vehicle traffic for the rail maintenance facility and other industry along Enterprise Dr and beyond,” Bowcock said.

“The government has assessed a need to spend a reported $50M on a bridge for the rail maintenance facility, but not one cent on a major arterial link to the M1 used by tens of thousands of drivers daily from our beach suburbs through Ourimbah on their daily commute via the M1.

“Some examples of the over-sized vehicles that continually block traffic on Burns Rd and also cause back-ups on Enterprise Dr are semi trailers, B doubles, tow trucks, trucks carrying excavators and other equipment, removalists, buses, mobile homes and caravans.

“When the trucks have to make dangerous turning manoeuvres in residential driveways and side streets, there is a risk of injury to motorists, pedestrians and local children, let alone possible damage to parked cars and driveways, fences, mail boxes, street signs, footpaths and the like.”

Mehan took up the issue with Central Coast Council.

“Council wants to discourage over sized vehicles and will also make representations to GPS providers, like Google, about their mapping.

“Council listened to my representations and Cr MacGregor was heavily involved in getting action on this issue and it’s an improvement which we hope works,” Mehan said.

“If it doesn’t then we will pursue other avenues to ensure that this area is not bound up by over-sized vehicles.”

The big new black and yellow signs warning of the low clearance underpass and an alternative route will be placed in several prominent positions on the freeway side of the highway and at Burns Rd.