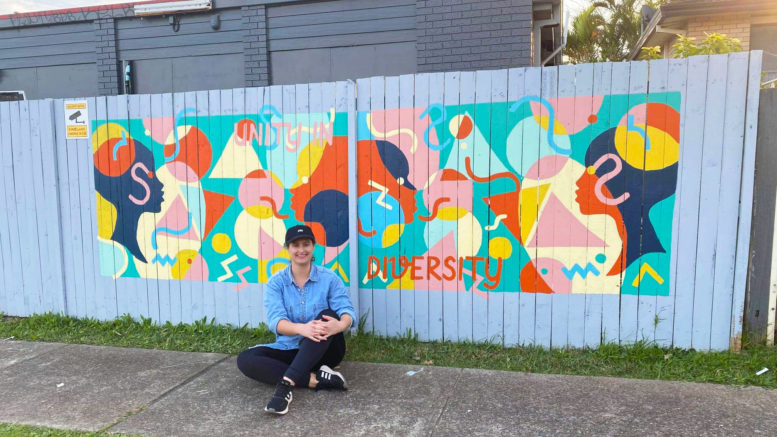 Danielle Said at the Budgewoi mural

A small team of local artists has created a mural painting in Budgewoi celebrating the theme, Unity in Diversity.

It takes pride of place on the fence of Budgewoi Corner Store, opposite the primary school in Lukela Ave.

“In response to the current issues going on globally, we wanted to celebrate diversity creatively by inviting members of the community to come along, bring a paint brush and take part, grab a coffee and band together,” said organizer, Danielle Said.

“It’s not a rally or a protest, simply a safe, community centred arts project to bring some warmth to all our hurting hearts right now.”

Daniella, together with friends, Lauren Dyson, Jemma Milanovic, Julie Burton and Bella Tanner, spent about 16 hours painting the art piece, which they said was a rewarding exercise by creating a happy space.

“It’s been a tough year for everybody and I think it’s nice to show some camaraderie for our brothers and sisters across the seas, and also in a way to come together as a community on a small, grass roots scale,” Daniella said.

“It was so nice out there while we were painting.

“People walking by stopped to chat and people driving by tooted their horns and it just started a conversation about the issues at hand, but also it was a gathering of people.

“It just created a happy space, and I think we all need that right now,” Daniella said.

Daniella said that it was such a positive project, that she’d like to see a mural festival or have a mural in each little local area to create a mural trail, and she’ll be exploring the opportunities available through Central Coast Council’s grants program for art projects.