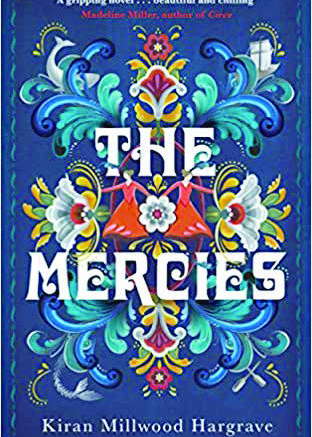 It is Christmas Eve in 1617 in Vardø, a small island located off the coast in north-eastern Norway.

A whale has been sighted close to shore, so the men of the town go out on their boats to try to catch it.

While they are at sea, a brutal storm comes, suddenly, “like a finger snap” – no one survives.

Forty of the town’s men are lost, among them, Maren Magnusdatter’s father, her brother Erik and her betrothed, Dag.

Christmas day brings snow along with the grief.

Maren, her mother and pregnant sister in law, Diina are snowed in for three days.

Just when Maren wonders if they will die one of the town’s women, Kirsten, digs them out and insists they go to church.

Maren is practical and, along with Kirsten, among the first women to rise from the shock of grief to prepare food and bring the men’s bodies from the shore.

Over the ensuing months, many of the island’s women begin to manage the fishing, the building, reindeer herding and butchery as well as all their usual domestic work – some of them even take to wearing torusers.

Many of the women are Sami women and turn to Sami spiritual beliefs in their grief while others seek solace in the Church – many think the men were tricked by the whale, that the devil is involved.

Eighteen months later, a new Commissioner is appointed to oversee the town.

Absalom Cornet is from Scotland and has been chosen by the Lensmann, who has the ear of King Christian IV (the Lutheran King Christian has introduced laws against witchcraft and has his sights set on wiping out the Sami people of the far north).

On his way to Vardø, Cornet stops in Bergen and chooses himself a young woman, Ursa, as a wife.

One their long journey to Vardø by ship, Cornet forces himself upon Ursa nightly and takes all her possessions.

They arrive in Vardø to find they will be staying in a small boathouse, not what they were expecting – cold, sparse and no servants.

Ursa is ill-equipped for the cold weather or how to keep house and enlists the help of Maren to navigate domestic duties.

A friendship blossoms into a beautiful romance, but also a very dangerous one.

Cornet, however, sees only a place untouched by God and flooded with a mighty and terrible evil, one he must root out at all costs.

We discover that he was chosen to be Commissioner because he has experience dealing with witches.

Meanwhile, the mixture of grief. jealousy and superstitious have caused the women of Vardø to break broken into factions.

Slowly they begin to turn on each other – fingers are pointed, and accusations made – and the trials begin.

I was drawn to this book because my mother was Norwegian and, because of her, I have a deep affiliation with the country.

As I discovered, The Mercies is based on real life events.

There was indeed a storm on Christmas Eve 1617 which led eventually to the Vardø witch trials.

Thousands of women, many of them of the Sami people, were executed.

A memorial by Louise Bourgeois and Peter Zumthor now stands on the site and was the touch-paper for this novel.

I enjoyed reading this book with its strong characters, beautiful settings and deep sense of historical tragedy.

I was particularly drawn in by the strength of Maren and her fellow women joining together in the face of adversity and the way this is contrasted with patriarchal fear, at that time, of women’s strength and reason.