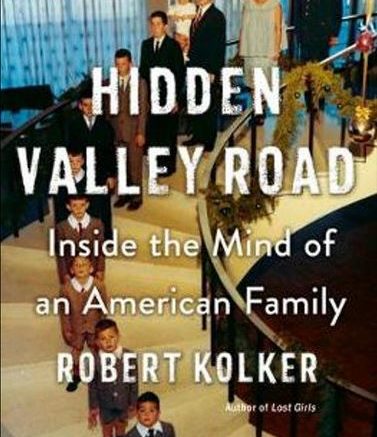 Mimi seemed proud of “being known as a mother who could easily accomplish such a thing.”

While having twelve children in itself is mind-boggling, six of the boys in the Galvin family have been diagnosed with schizophrenia.

Mimi and Don met in 1937 when he was 14 and she was 13. They dated through school and in 1944, while Don was in the Navy he got word that he would be heading to the South Pacific to fight in the war.

A few weeks before shipping out Don and Mimi got married in Tijuana.

Then, every other year, Mimi gave birth to another Galvin, all the way up until Mary in 1965, by which time their doctor refused to allow Mimi to have any more children and gave her a hysterectomy.

Twenty years of birthing children – it makes me tired just writing that.

The Galvin’s moved around the country for a while as per Don’s job (now with the Air Force) until they settled in Colorado.

While in Colorado Mimi fulfilled a Galvin family promise and converted to Catholicism.

Father Robert Freudenstein was there to guide Mimi through her conversion and was a common fixture in the Galvin household – each Galvin boy served as an altar boy and the oldest brother, Donald, even drove “Freudy” around after he lost his license to drink driving.

Insisting that they were raising a model family, the Galvins refused to acknowledge problems, such as violent fights among the older brothers, which the parents dismissed as merely roughhousing.

Donald was a prime instigator and picked on and beat his younger siblings.

Complaints to the parents were useless – Mimi told them not to tattle, thinking her Donald was perfect.

As the years went on Donald’s mental health got worse as did five more of his siblings. Police were called as the fighting escalated the point of Mimi locking herself in her bedroom.

There were constant trips in and out of mental health facilities … medications … strained relationships … abuse … a murder/suicide.

With each diagnosis, Mimi “became more of a prisoner—confined by secrets, paralyzed by the power that the stigma of mental illness held over her.”

With all the attention on the sick children where did that leave the others?

Not only were the healthy Galvin kids subject to abuse from their siblings and neglect from their parents, but they were left to wander when and how the condition might begin to afflict them?

Hidden Valley Road delves into the family’s story and how the matriarch, tries to keep it all together.

Throughout, as the family becomes the subject of research, theories are presented as to the cause of schizophrenia and the best treatment from debilitating drugs to shock therapy.

For a while it was hypothesized that the disease was due to the way a mother raised the children, schizophrenogenic.

When this was presented “Mimi was first appalled, then horrified, and finally defensive.”

But later when it was thought that genetics was the cause she was quick to blame Don’s family for passing along the genes.

I enjoyed reading this -it is at once tender and chilling – although I kept losing track of which boys where healthy and which ones were sick (there are just too many boys!)

My mind also started to wander when the book went into the research of the cause of schizophrenia, particularly brain cell names, gene names, drug names, association names, the list goes on.

But the book draws upon countless hours of interviews by Kolker with the Galvins, their friends and their therapists, as well with the scientists who studied the Galvins’ genetic material and ultimately is an intriguing portrayal about an intriguing disease and the impact it can have on a family.

Book Review – Who is Maud Dixon

Book review – The Pull of the Stars