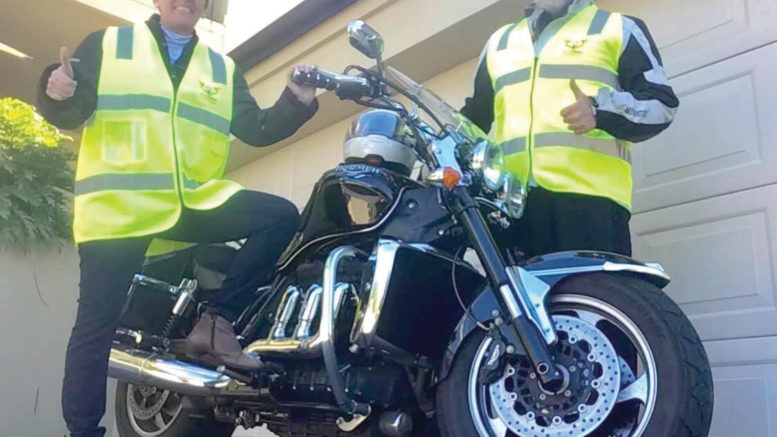 Volunteer motorcyclists’ medical courier service, Blood Bikes Australia, has started up on the Central Coast, and is actively looking for healthcare providers and volunteers to join the organisation.

The primary purpose of the service is to assist in the transportation of lifesaving supplies between hospitals, medical centres and anywhere else they are needed.

Blood Bikes Australia is run entirely free of charge with an aim to alleviate costs placed upon health care services. This money can then be spent on other health areas or on further research.

The unique group was started up in Australia by avid Queensland motorbike rider, Peter Davis, who was inspired by Blood Bikes in the UK and Ireland. “When a mate told me about Blood Bikes Scotland, I thought well I am retired now, and I love riding my bike,” Davis said.

“I thought I could ride and do some good at the same time – almost like here is an excuse to ride.” Initially, Davis was solely transporting blood, but this has expanded to all manners of pathology, medicines and equipment. Donor breast milk is yet to be added to the list.

The organic material is carried between locations in a standard-sized insulated and cooled blood box which is attached to the bike. The box can keep the blood cool for up to eight hours in 35-degree heat.

Davis is steadily expanding the service throughout Australia and although it is only new to the Coast, the region has six volunteers ready to help. A requirement in joining is to complete an online training course through Blood Safe on Blood Delivery Training, before being supplied with a uniform.

Four of the six Coast volunteers have completed the training and two of them are Robert and Kelly Holloway of Kincumber. Bob Holloway said he was keen to get started. “We are just really starting to build up a network of connections,” he said. “It is just in its infancy at the moment.” His reasoning behind joining the group stems from his own personal connection to the blood donation industry after he fought a battle with leukaemia.

“When I got leukaemia, I got copious amounts of blood for transfusions,” he said. “I kissed every bag of blood I got, and I thought somehow, I have got to give this back. “So, I started up this thing called Bob’s Blood Angels which is a Facebook page encouraging people to donate blood. “Four months ago [Blood Bikes Australia] popped up and I thought it was such a great steppingstone for Bob’s Blood Angels to continue on the goodwill.

“Blood transportation is usually done by the courier system in the hospital, but when they are desperate and have not got enough couriers, they actually have to hire cabs. “These cabs can cost them anywhere between $100 and $200, depending on where they are going to.” Currently, there are 75 volunteers in all states across Australia, including the ACT.

Davis said there is no cost to the health care system in using the service because volunteers are required to supply a motorcycle, work in their own time, and pay for all tolls and petrol. Holloway has been in contact with some health care services around the Central Coast, but since COVID-19 poses a risk on his health, the process has slowed down.

Both Davis and Holloway have emphasised that their challenge is getting health care services on board which is why they are encouraging providers who would like to be involved to contact them via their Facebook page “[Volunteers] need to reach out to their local hospital and say hey I am your Blood Bikes Australia representative for this particular hospital,” Holloway said. “And then if they get called out, they go straight to the hospital, pick up whatever (they need to), take it to where (it needs) to go and enjoy the ride and do some good.”

Health services and volunteers keen to be involved should email bloodbikersaus@gmail.com