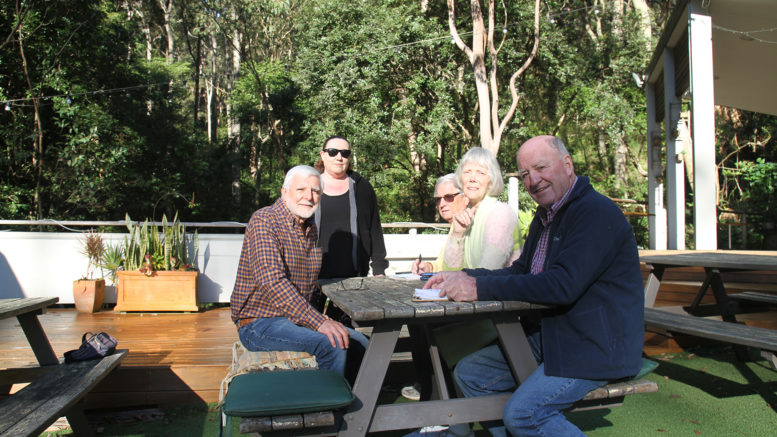 Hardys Bay Club is making plans to reopen with a new community focussed business model after being forced to close their doors on March 23 due to COVID 19.

A GoFundMe page was launched on June 30 and aims to raise $100,000 to help pay creditors, undertake maintenance and improvements and for necessary restocking. The GoFundMe page is being coordinated by committee member Jacqueline Hall. The campaign raised almost $2,000 in the last 48 hours.

Hardys Bay Club (formerly Hardys RSL club) has a long legacy of attracting amazing entertainers over the years, from blues and jazz bands to travelling gypsy groups and young aspiring artists launching themselves.

Last year, locals Mark Gable (of the Choirboys) and wife Melinda Schneider filled the house, while indigenous band Mirrabooka and local comedian HG Nelson also rocked in for a show with CCN’s David Abrahams to showcase the work of the Kincumber Roundabout Think Tank.

The club has also been the home of some celebrated restaurateurs over the years including Brian Lizotte. The club is a membershipbased company with a renewed and experienced finance committee that includes two accountants.

Negotiations between the club and the property landlord has resulted in a rent reduction, however members from the club have said there is a large amount of work that needs to be done to get the club back up and running. During the shutdown, the club experienced wear and tear due to weather and wildlife.

Treveen Brown, Community Liaison Member, has been heavily involved with Hardys Bay Club for an extended period, and has shared her devastation about the state of the venue. “It’s appalling, it’s been completely shut up,” said Brown.

Due to a lack of use, Brown explained that the beer lines have clogged up, cockatoos and other wildlife have damaged some of the structure, and debris has been scattered.

A handful of dedicated community members have worked behind the scenes in an attempt to repair the venue, but Brown and the other members are now calling out for volunteers. “This will be a volunteer run club, if they want the club they are going to have to work,” says Brown.

The Committee are looking for anyone involved in maintenance, painting, cleaning, guttering, as well as musicians or anyone with an RSA, and emphasise that any help is welcome.

Robert Barnes works on the Finance Committee and was involved in negotiating the rent with the landlord. “I have worked for many years in public practice and I think it is time to give back to the community, and I think being involved in the club gives me the opportunity to give advice and to help in all respects.”

Barnes says that the money donated to the fund will be used to replace old furniture, install a new air conditioning unit and renovate the kitchen and bar area.

“It is going to be a mixture of working capital and improvements and hopefully, when people come and attend over the next few months, they will see the benefits,” says Barnes. There is an overall optimism among the community members that the club will be able to reopen but only with the help and support from the community.

Brown said she had reached out to the Sydney based Petersham Bowling Club for ideas and advice on government grants. “They are also a community run, no pokies club,” says Brown. “They have just been doing it for a few years and they have learnt a lot along the way.

“It is very much volunteer run and we hope we can work closely with them in the future.” “They were in awe of the opportunity here and that is what it’s all about, because if we lose this, well, that is just too sad to think about.”

We provide a link to the GoFundMe page is here. This is a non commercial community service.