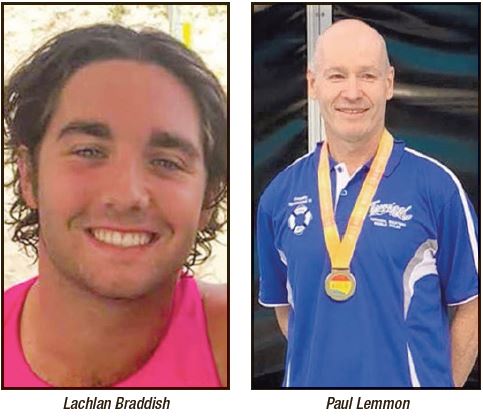 Surf Life Saving Central Coast is congratulating two of its members after winning the ‘Awards of Excellence’ at the 2020 Freemasons Presentations.

The awards were presented virtually to Lachlan Braddish from Umina SLS Club and Paul Lemmon from Terrigal SLS Club.

Braddish took away the ‘Young Athlete of the Year’ after becoming the 2020 State Champion Surf Life Saver of the Year and receiving a silver medal in the U19 Belt Race.

He was also able to score himself 13 medals at the NSW Pool Rescue Championships, all while studying for his HSC’s.

Being an ‘elder statesman’ of the Umina Squad, he volunteers his time at the Nipper Pool, coaching and supporting others.

“Many of Lachlan’s competitors say that he is the ultimate athlete, [but] he will also always put his hand up for whatever his team needs,” a spokesperson for the Freemasons said.

Lemmon from Terrigal SLC won ‘Master Athlete of the Year’ for his outstanding ability to go above and beyond with the club and other sporting achievements.

Lemmon has been with the club since 1980, and this was the 10th consecutive year he has won the award.

He is the club’s Ski Coach where he provides technique and skills sessions for competitors, and he is also involved in a youth members’ club called the Inheritors Program.

Lemmon has previously been a Pool Rescue Coach and led Iron Person and Board Sessions.

“With all his knowledge, skills and experience, Paul is an invaluable asset to have at the club,” the spokesperson said.

Freemasons on the Central Coast have supported SLSCC since 2012.

Final instalment of funding given to surf clubs