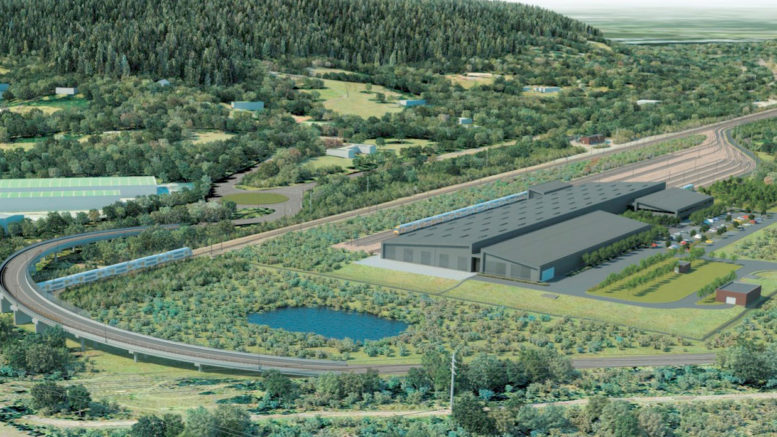 Artist’s impression of the rail maintenance facility at Kangy Angy

Transport for NSW has confirmed that it has met only 13 percent of its biodiversity offset requirements to compensate for the loss of habitat for endangered bird species in the construction of the rail maintenance facility at Kangy Angy.

A second 12-month extension, to June 2021, has been granted to Transport for NSW (TfNSW) to fulfill requirements in the project’s Biodiversity Offset Package.

This was revealed in the Environment Protection and Biodiversity Conservation Annual Compliance Report, January 2018 to January 2019, which was released in April 2020.

The rail facility’s Biodiversity Offset Strategy states that offsets must be on a like for like, or better, basis and located within the region of the project to provide similar habitat to that being removed.

Barbara Gorman, of the Save Wyong Trees community group, said TfNSW was failing to fulfil its obligation to provide biodiversity offsets for the detrimental effects that the project was having by clearing 19ha of critical habitat which was previously identified for the critically endangered Regent Honeyeater and endangered Swift Parrot.

“During 2019, the Department of Planning and Environment extended the period for offsets and allowed the developer to look well outside the Central Coast for suitable offset sites.

“Meanwhile, sightings of the birds have diminished on the Central Coast.

“Transport for NSW advises that the approval rules call for offsets to be established to achieve a standard of no net loss of biodiversity, but this has not been the case with Kangy Angy.

“Environmentally, the project is off the rails,” Gorman said.

“The project’s report proclaims that it is compliant in meeting its approval conditions issued in 2017, yet the Department of Planning had not audited the project nor required the production of any documents demonstrating compliance in the past 12 months.

“Transport for NSW claims it is compliant and the Department of Planning and Environment accepts such self-assessment, though it has not bothered to audit the project.

“They may claim to be compliant with the letter of the law, but not with the spirit,” Gorman said.

“There is something wrong with a development approval system when a developer can easily postpone the establishment of offsets for critical habitat by a number of years.

“In the case of offsets for critically endangered species, the delay may lead to extinction in a particular area.

“In any case, I see the application of NSW environmental offsets as smoke and mirrors.

“How can the destruction of one area of biodiversity be offset by agreeing to preserve another existing area of similar biodiversity?

“By my reckoning, destruction of one of two areas results in a 50 percent net loss of biodiversity.

“Similarly, the nomination of an offset area remote from the affected local government area is a 100 percent net loss to the subject area.

“This state government seems happy to frustrate the National Recovery Plans for the Regent Honeyeater and Swift Parrot that were set up following their listings under the Commonwealth Environment Protection and Biodiversity Conservation Act 1999.

“If such behavior by state government departments is taken as an example of the application of the planning regime being set up to facilitate development, our environment on the Central Coast is in for a rough ride,” Gorman said.

A TfNSW spokesperson said that so far, 13 percent of the required Swift Parrot and Regent Honeyeater biodiversity offsets had been secured through the purchase of biodiversity credits from private landowners in the Lake Macquarie and Hunter Valley regions who have vegetation on their properties which contains suitable habitat type for the birds.

“The project is continuing to source the required biodiversity offsets,” the TfNSW spokesperson said.

TfNSW confirmed that it was working with other landowners within the Central Coast, Lake Macquarie and Hunter Valley regions to meet offset requirements.

According to TfNSW, offset requirements for Wallum Froglet had been met and a contribution was being made to the Mahony’s Toadlet Saving Our Species Progam, which is a conservation project by the NSW Department of Planning, Industry and Environment.

Biodiversity credits are generated when landowners commit to lock up parcels of land containing sensitive vegetation and habitat under a formal Biodiversity Stewardship Agreement with the NSW Biodiversity Conservation Trust.

The agreement details land management actions to ensure the long-term viability of the vegetation on the land and an assessment by a qualified specialist determines the number and type of biodiversity credits generated for the site based on the vegetation present and the fauna habitat the vegetation provides.

Biodiversity credits are then sold by the landowners to developers, such as TfNSW for the Kangy Angy project, to offset the developer’s impacts on biodiversity at the project site.