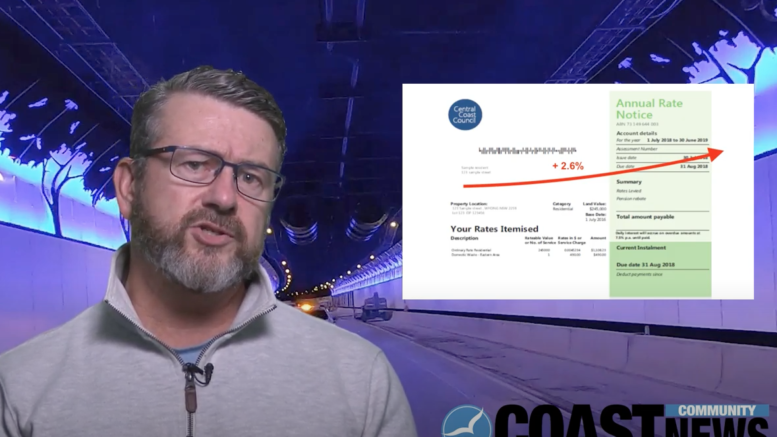 And that’s the opening of Centrelink – not the office where you collect your JobSeeker payment, but the Ourimbah mountain-bikers new Downhill Extension Trail.

The extension was funded by the State Government’s Community Building Partnerships scheme and provides a more technically challenging trail for experienced riders.

The opening however coincides with a major flare-up between mountain-bikers and environmentalists who have claimed unauthorised trail building is causing excessive damage to the bush and are seeking to have riders expelled from sensitive areas such as Kincumber Mountain.

Riders have hit back with claims that people have set dangerous boobytraps on trails, including fishing line, obscured logs and nail spikes and called upon the Council and the State Government to provide more trails to cater for the rapid growth in the mountain biking.

Last week we reported on grave concerns raised by the Community Environment Alliance over the proposed housing development by the Darkinjung Local Aboriginal Land Council in native bushland in Kariong.

The site is adjacent the well-known Bambara, home to a number of indigenous sacred sites.

Well, this week, the Darkinjung Land Council hit back.

Chairperson Matt West said much of the site would be preserved and that the proposed housing developed would provide important economic and social support for local indigenous people.

West said he was keen to dispel the pervading rhetoric that Aboriginal people should only be allowed to use their land for cultural purposes.

Its an issue that already causing a major divide within local indigenous communities and we’ll have more on that in coming weeks.

In other news, the Central Coast Council has triggered some anger across household with the decision this week to lift Council rates by 2.6% in 2020-21.

The increase is allowed under a ruling by the Independent Pricing and Regualtory tribunal, but the increase is estimated to strip 4.4M out of residents pockets at a time when many household are struggling economically due to Covid-19.

And it was with great sadness we reported this week on the passing of a great champion of the Central Coast, Malcolm Brooks.

Malcolm was well known to everybody as the local member for Gosford from 1973-1976 and for serving in local government as an alderman and councillor for more than 20 years, including a couple of terms as Mayor.

Some will also remember Malcolm from his earlier years as a rally car driver who participated in the famous Redex Trials as well as being an active pilot along with his wife Tricia.

His contributions to local government on the Coast were recognised by councillors this week include former Mayors, Chris Holsteins and jane Smith.

NorthConnex has hit another milestone and another photo opportunity for our politicians.

Member for Gosford, Liesl Tesch this week hit out at the newly-formed local planning panel saying it was a rubber stamp for development. Let’s hear what she had to say.

And while we’re on Council news, the long-awaiting Economic Development Strategy was released this week for public comment.

The strategy will be on exhibition for just 28 days until July 20 and can be downloaded from the council’s website.

And finally Ross, local football, women and men alike, are excited by the news that Women’s World Cup 2023 is coming to Australia and New Zealand.

Hot on the heels of that news was an announcement by mayor Lisa Matthews that Council would push to host some of the events and potentially one of the visiting international teams, right here on the Coast.

I spoke earlier today with Gabby Bowles, former Councillor and now development managers with the Mariners.

That’s very exciting news for the football community here on the Coast.

The news was delivered over the phone from the clubs CEO Cameron George in Auckland and reportedly came as a complete shock to players and coaching staff.

Shark’s legend, Paul Gallen, described the decision as heartless after all the dislocation the club has in recent months, not to mention and slew of injuries to key players.

Coast News issue 248 hit the street this morning with all these stories and much more and you can visit our website to see where you can get it.

Now, you may have just watched it, but the rebroadcast of the Afternoon with Coast Opera Australia Disney to Diva with exclusive interviews with the stars, is available on the Coast Opera Australia Facebook page and we live you this evening with a snippet from the show, from tenor, Gaetano Bonsante.

I’m Ross Barry, and we’ll see you next week.

Presented by Ross Barry with David Abrahams. Filmed and edited by Alex Herget.