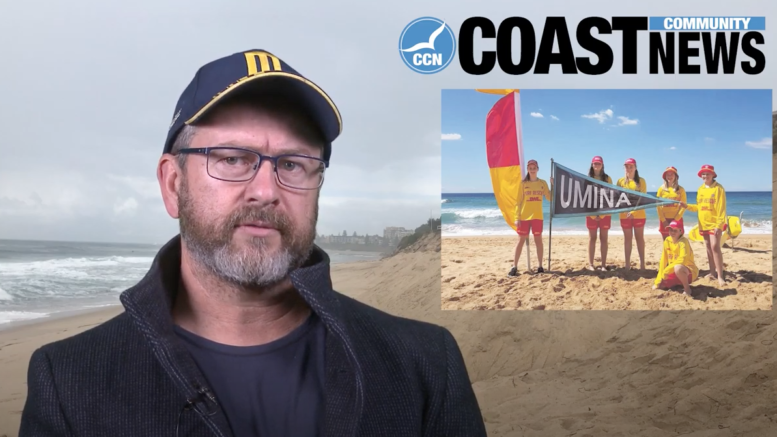 Executive director of the Barang Regional Alliance, Vickie Parry, said indigenous people were still fighting for the 432 people who died in custody since 1991.

The event however was conducted and was marked by a show of support from local Coast police who took to one knee in solidarity with protestors.

The recent storms and high tides that caused the ALP England to lose some 50 containers overboard has also caused some major erosion of local beaches.

This footage shows the erosion at North Entrance and similar scenes were reported in Killcare, Umina and Macs as well as several northern beaches.

It re-ignited the debate about the rights of beach-side homeowners to shore up their properties against rising ocean levels and who should bear the costs.

Council passed a motion this week to work with local beach-side residents to help them defend properties.

Thanks Ross, this week was the first sitting of the new Central Coast Local Planning Panel.

The LPP effectively takes planning powers away from the council and puts it into the hands of a panel appointed by the Minister of Planning Rob Stokes.

The LPP’s stated intentions are to increase transparency and efficiency in the planning system.

We talked about that to Deputy Mayor, Jane Smith.

And on Monday the Queen’s birthday honors list was released with seven Central Coast residents receiving awards for services to the community.

Among the many remarkable recipients this year was former NSW Minister John Della Bosca.

I spoke with John earlier today.

And a full rundown of all the local Queen’s Birthday honors recipients is available in this week’s Coast Community News and Coast Community Chronicle or online at our website.

This week’s council meeting had a long agenda with many items on the agenda.

One item was the new commuter carpark recommended by staff to be built behind Central Coast Stadium.

As we reported last week, the 30 million dollar facility funded by federal, state and local sources promises to ease the growing parking problems in and around Gosford CBD.

But the Commuters Association has challenged the proposal saying the funding was meant specifically to address car parking issues and not for aspirations of Council, including conference venues.

Others have also questioned the location and design of the facility as well as the loss of the open grassed area often used by families on game days.

The final decision was deferred by councillors to await more feedback from locals and staff.

Council did however endorse the release of the long awaited Central Coast Economic Development Strategy, something that it hopes will drive investment and employment in the region. The strategy is now on public exhibition on the Council’s website and we’ll have more to report on that in coming weeks.

And finally Ross, the Coast was treated to another amazing operatic performance by Coast Opera Australia, Disney to Diva, led by acclaimed soprano Angela Brewer.

Australian seabird rescue Central Coast this week released dotti the sea turtle back to the ocean at Cabbage Tree Bay.

Dotti has been in care for over nine months after being found with a cracked shell and collapsed lung.

In sport, it was Umina surf life saving club’s night of nights last weekend at the region’s annual Awards of Excellence.

The club took out seven award including the coveted Club of the Year Award.

For a full rundown of all the awards, please see our story published on the website.

And in Rugby League, the second of a three-game NRL blockbluster weekend kicks off shortly at Central Coast Stadium when the Central Coast’s NZ Warriors take on the North Queensland Cowboys.

Last night the Many Sea-Eagles staged a remarkable comeback from 18-0 down at half time to defeat Brisbane 20-18, andf we can only imagine what coach Des Hasler might have said or done in the sheds at half time to spark that turnaround.

And all those stories and more are available online on our website.

Now there’s been some suggestion that many of you may have preferred the news being read by last week’s guest presenter, Jacinta Counihan to the current anchor.

If that’s the case, please write in to the editor@centralcoastnews.net. and tell us.

Or, if you preferred our previous news reader, Georgia Lienemann, there is also a new “Bring Georgia Back” movement that you can sign up to.

And as Covid-19 restrictions are eased around the Coast, we leave you today with a little ode to the Coronavirus written and produced by locals.

Presented by Ross Barry with David Abrahams. Filmed and produced by Alex Herget

In defence of libraries