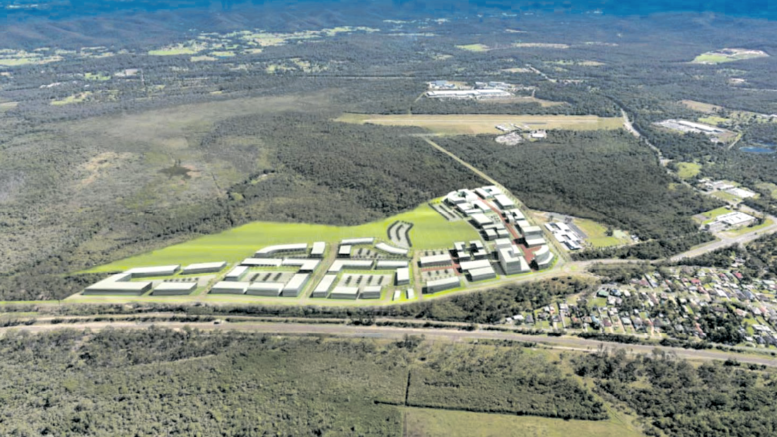 A concept diagram showing the location of a proposed Warnervale Education and Business Precinct.

Cr Best sought at the June 9 meeting to adopt the original staff recommendation to endorse the masterplan for the proposed precinct, and to call for Expressions of Interest from business, industry and education providers.

Hours before the meeting started, Council staff changed the recommendation to instead defer endorsement and the seeking of Expressions of Interest so that the Warnervale Working Group could review the masterplan.

After some debate, Council resolved that the matter be deferred to allow consultation with the Working Group prior to a further report being provided to Council.

Their aim is the dual purpose of overseeing activities to permanently protect Porters Creek Wetland as well as progressing development of cleared land currently available in Warnervale, and zoned industrial or business, for an employment precinct focused on enterprises around health, manufacturing, food

Council also decided in April to engage a project manager for an initial 18 months to oversee the development of a business and education precinct as well as a consultant to put in place a Conservation Agreement on Porters Creek Wetland.

The first step is to subdivide council owned land to create the precinct on the eastern side of 30 Jack Grant Ave, further along from the airport.

Cr Best doesn’t see any reason to hold back and says the working group could be working hand in glove with progressing a critically important economic growth opportunity which is desperately needed in the north.

Cr Bruce McLachlan supported endorsement of the draft masterplan and the call for Expressions of Interest because, “referring it to a committee would not start the process of producing any jobs”.

“We have to be proactive and progress our business lands,” he said.

“People are just sick to death of the deferments and inaction of councillors who won’t make a decision to move forward.”

Council staff estimate that the business and education precinct would create about 3,367 direct full-time jobs and thousands more indirectly.

Cr Kyle MacGregor said that it isn’t about stopping jobs or Expressions of Interest, it’s about endorsing a plan from 2014, originally from Wyong Council, and it’s not necessarily reflecting the current economic

environment.
“This is about the proposal

being current, rather than rehashing old ideas,” he said.

The draft masterplan takes in 63ha, including 1.7ha of environmental conservation land sandwiched between 34ha zoned for business enterprise and 29ha zoned for education purposes.

Development of the proposed precinct has undergone considerable planning works, starting in March, 2012, with rezoning of the land by the former Wyong Council, followed by a draft Wyong Education and Business Precinct Masterplan in August, 2014.

Some of the ideas raised in the 2014 plan were a leisure and aquatic centre, an educational campus for about 7,000 students, including a residential college for 1,500

That draft plan has never been put out for formal public exhibition.

However, it has continued to be considered as part of the broader development of Warnervale Town Centre and the Wyong Employment Zone, of which this parcel of land is a part.

Planning for projects such as the Mardi to Warnervale water pipeline, now under construction, and the yet to completed Warnervale Link Rd, connecting Wyong to Watanobbi, has taken into account the draft precinct masterplan.

Biodiversity Certification is required to progress with development of the proposed precinct, however, an initial

application in 2016 to the Biodiversity and Conservation Division lapsed.

A new Biodiversity Certification application will be lodged following a Council decision in November, 2019, to separate a parcel of land to the south of the precinct to become part of Porters Creek Wetlands as well as a boundary adjustment of airport lands to be included in the wetlands area.

A Council report says that the complete subdivision and certification process could possibly take up to two years.

“Nevertheless, development of the precinct masterplan continues so that once the subdivision is complete, Council would be able to lodge a separate development application to move forward.”

Next year’s draft budget has already allocated $325,612 for the associated subdivision, biodiversity assessment and expressions of interest for the proposed Warnervale Education and Business Precinct.

The matter now rests with the Warnervale Working Group and a subsequent report to Council.

No timeframe for that to happen was indicated at the Council meeting by the supporters of that action, who were Councillors Lisa Matthews, Louise Greenaway, Jillian Hogan, Kyle MacGregor, Richard Mehrtens, Jane Smith, Jeff Sundstrom and Doug Vincent.