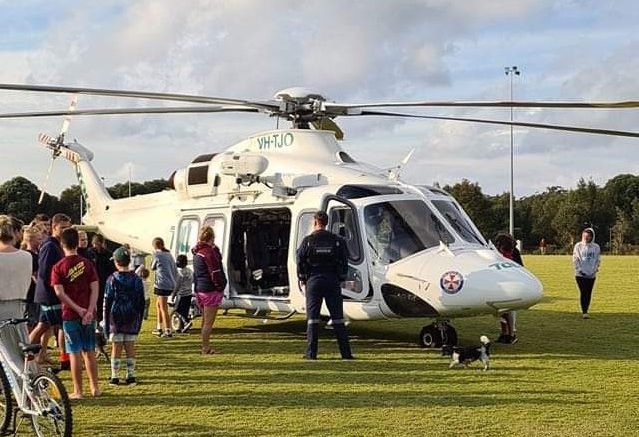 Rescue teams ready to transport a woman rescued from rocks at Bateau Bay.

Twice in the space of four days, emergency rescue teams were called to save people from the rocks below Crackneck Lookout in Wyrrabalong National Park at Bateau Bay.

Just before 6.30pm on Wednesday, June 3, rescue crews and emergency services were called to the area after reports of an 81-year-old man trapped on the rocks by the rising tide.

A crew from Central Coast Volunteer Rescue Squad assisted NSW Ambulance special operations paramedics and the Westpac Rescue Helicopter Service to set up vertical rescue equipment to winch the man to safety up over the 200m cliff face.

“I think he became exhausted from where he’d walked and it was getting dark and he couldn’t go any further than where he was, 200m below the Crackneck Lookout,” Hart said.

“Thankfully the police helicopter was able to locate him with their searchlight in the dark.

“He was safely winched up by the Westpac chopper and we were there as a backup in case the helicopter couldn’t winch him.

“Otherwise, we would have had to abseil over and pick him up and bring him back up to the top.”

The man was then transferred to a road ambulance and taken to hospital.

Just four days later, on Sunday, June 7, emergency rescue crews were again called to the same spot to rescue a woman in her 50s.

“She was walking on the rock platform below Crackneck Lookout and fell down a ledge about 2m and suffered a head injury,” Hart said.

Five ambulance crews and a rescue helicopter arrived at about 1pm and paramedics stabilised the woman’s condition on the rocks before she was winched to safety and then transported to Royal North Shore Hospital.