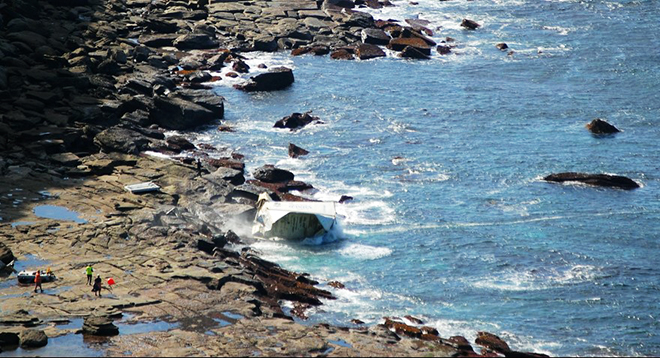 A container is dragged off the rocks at Bateau Bay

Aerial observation flights along the Central Coast were conducted on Friday, June 5, on the lookout for remaining containers and debris from the APL England cargo ship, that may have been stirred up by recent gale force winds and hazardous surf conditions.

This follows 50 containers having fallen overboard from the ship on May 24 in rough seas, causing the containers and their contents to be strewn along some of the beaches on the Central Coast.

The whereabouts of 35 of the 50 containers and contents that went overboard is still unknown.

Aerial sweeps spotted a new lot of debris on North Entrance Beach, and a clean-up started on Sunday, June 7.

Part of a container is still on a rock shelf near Yarunga St, Bateau Bay, while a container on rocks near Yumbool Point in Wyrrabalong National Park and four containers off Crackneck Point have been removed.

Another five which washed ashore on Bateau Bay Beach near Parkside Ave have been removed, and the beach is temporarily closed

Foam reported at North Shelly dog beach and off Cabbage Tree Harbour has been cleaned as well as the removal of five containers, masks and foam at Birdie Beach in Munmorah Conservation Reserve.

NSW Maritime Acting Executive Director, Alex Barrell, said that in addition to ground clean-up crews, two NSW Maritime teams took to the skies to survey the coast from Sydney to Port Stephens in the north and south to Ulladulla.

“The kind of weather we have experienced last week, and which is continuing along NSW coastal waters, often stirs up the water column,” he said.

Electronic signs to warn the boating community of floating debris have been placed at key locations, including Norah Head boat ramp, and NSW Maritime has teamed up with surf lifesaving clubs to keep up important safety messages.

Meanwhile, the APL England remains in detention at the Port of Brisbane following charges laid by the Australian Maritime Safety Authority (AMSA), which is seeking $22M in financial security from the insurers to cover the estimated clean-up costs, and until the ship’s serious deficiencies have been rectified.

Charges laid relate to offences of pollution and/or damage to the Australian marine environment as a result of poor cargo loading.

AMSA said the ship had inadequate lashing arrangements for cargo and securing points for containers on deck were heavily corroded.