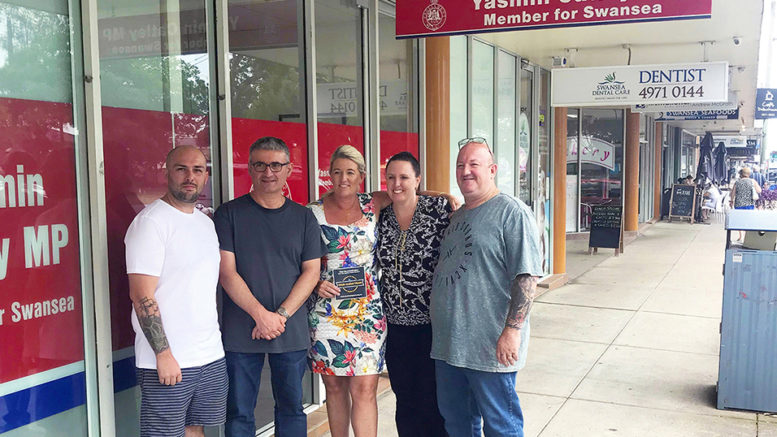 Member for Swansea, Yasmin Catley, with some of the cleaners whose jobs could be affected

Shadow Minister for Regional and Rural Jobs and Member for Swansea, Yasmin Catley, has called for assurances from the State Government that train cleaning services will not be put out to tender, with 12 jobs at Gosford railway station on the line.

Catley said the contract for train cleaning between NSW Trainlink and Sydney Trains had expired, with a letter from Parliamentary Secretary for Transport and Roads Eleni Petinos confirming the Government was “currently reviewing its cleaning arrangements to see if there is a more modern and financially sustainable cleaning service offering for its fleet, statins and facilities”.

If the service were privatised it could affect eight jobs at Hamilton and 150 at other country stations as well as the 12 Gosford jobs, she said.

“The cleaning service includes 12 jobs at Gosford station; these are good local jobs and provide an important economic activity in our community,” Catley said.

“For the Government to sell these workers out at such a time of economic uncertainty (would be) simply disgraceful.”

Catley said since the onset of COVID-19, Transport for NSW had increased its cleaning capacity by more than 83,000 hours to support customer and staff health and safety during the pandemic.

“The Government has relied on these workers to keep commuters safe and has asked them to put their own health at risk in the process,” she said.

Catley said she wrote to the Government in March asking for assurances the cleaning jobs would not be cut or privatised, but the Government’s reply, received two months later, gave no such assurance.

“If anything, it demonstrates the contempt the Government has for workers, it’s this,” she said.

“(The Government) needs to stop trying to cut jobs and start supporting the people who’ve kept our trains clean all along and kept things moving during COVID=19,” she said.

Parliamentary Secretary for the Central Coast Adam Crouch declined to comment on the matter.