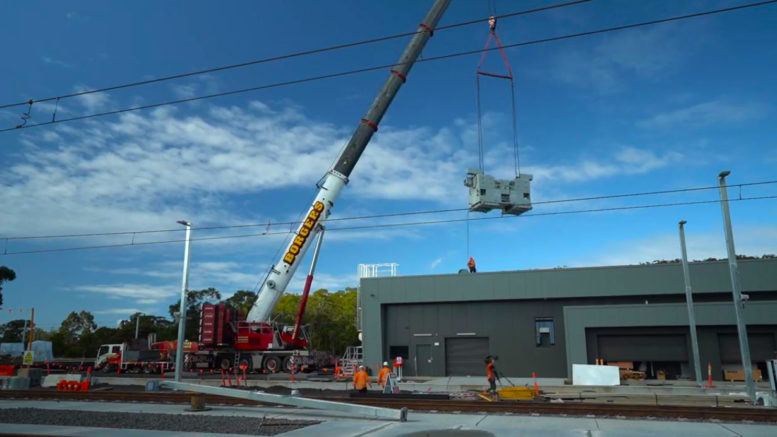 Another major milestone has been met in the construction of the intercity rail fleet maintenance facility at Kangy Angy, and the project scores an Australian first in recycling of single-use plastics at the site.

Earlier in June, a huge wheel lathe was moved into the intercity rail fleet maintenance facility.

The wheel lathe is a vital piece of machinery allowing the wheels of a train to undergo repairs while still attached to the train, which considerably reduces maintenance timeframes.

It took about six hours and a 400 tonne crane to position the lathe, which weighs 50 tonnes, four metres wide and five metres long.

It is in an enclosed building at the facility to minimise noise impacts.

Working with Downer, using state of the art technology, more than 226kgs of soft plastic, equivalent to nearly 57,000 single-use bags, was captured with other recyclable waste, including used toner cartridges, to process into small pellets, produced by Close The Loop, which are then incorporated within the asphalt mix.

This sustainable initiative reduces the use of crude oil in the construction of local roads and minimises plastic landfill.

“This is the first time an Australian construction project has captured its own production waste and transformed it into an approved road surface,” said Executive General Manager – Infrastructure NSW/ACT, Andrew English.

“Our project team has successfully worked with Australian industry to pioneer this process for the first time on a Transport for NSW site,” he said.

The $300M rail fleet maintenance facility is nearing completion with a lot of the construction work starting to wind down and the project entering the operational phase.

Parliamentary Secretary for Central Coast, Adam Crouch, says the facility was boosting local employment and business opportunities for the Central Coast with more than 300 jobs and apprenticeships during construction, and 100 jobs to be permanent once the facility started full operation.