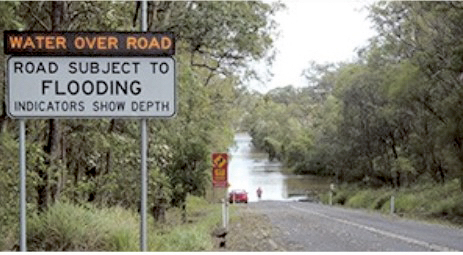 Flood risk in the Ourimbah Creek catchment will be further investigated now that the Kangy Angy Rail Fleet Maintenance Facility is all but completed, and with particular reference to flooding from the significant rainfall event of February.

Councillor Louise Greenaway called for the risk assessment as an addition to Central Coast Council’s Ourimbah Creek Catchment Floodplain Risk Management Study and Plan, before it was given the nod at its May 25 meeting.

“It’s sensible, straightforward and logical to assess the risk of this massive new facility at Kangy Angy,” she said.

Cr Greenaway said the plan seemed deficient, given that some of the studies were prepared before the rail facility and the February floods.

“These sorts of studies are crucial to managing our floodplain risks and we need to be mindful that things might be different than what is actually presented to us in the plan.

“The plan doesn’t take into account the impervious and significant changes such as surfaces at the rail facility, where it was once a wetland, a fairly extraordinary change in an area that already was subject to a floodway.

“We need to know if there is any risk and put in any mitigation measures if necessary,” Cr Greenaway said.

Transport for NSW, who established the rail facility, say the overall drainage of the maintenance facility has been designed in consideration of the facility itself and the surrounding areas.

“During a large rain event, water is captured in two detention basins,” a spokesperson for Transport NSW said.

“Water from the detention basins is slowly released into clean natural waterways in a controlled manner at a rate no greater than the rate prior to the facility being built, to ensure that neighbouring properties and downstream catchments are not adversely impacted.

“The detention basins and their storage requirements have been designed for a 1 in 100 year event with a 10 percent allowance for climate change.

“This is a consistent requirement for the type of infrastructure built by Transport for NSW.”

President Di Willard said the whole section on Kangy Angy was written in 2016 based on “the most recent facility design plans (June 2016, Reference14).

“It’s all theoretical based on evolving plans,” she said.

“No one has reviewed the plan based on what is actually there.

“The study states: ‘the community consultation process highlighted that some local residents are opposed to the Kangy Angy facility (see section 4.1) due to perceived flood impacts, however, the current study makes clear that this facility will not impact on peak flood levels for events up to and including the 1% AEP as the facility is situated outside of the flood extent’.

Willard said that the study goes on to say: ‘however, one issue raised by local residents is the increased runoff due to less infiltration as a result of covering the present pervious surface with an impervious surface (building roofs and hard stand areas) and this is addressed below’.

Willard said the study also noted that ‘removal of natural vegetation and the sealing of pervious surfaces with hard stand areas or building roofs will increase the volume of runoff into the adjoining creek systems, however, the magnitude of the increase is impossible to accurately estimate based on the limited information provided to date’.

Willard says Council’s own flood mapping shows the Kangy Angy site as being subject to flooding, so they don’t even rely on their own information.

“Information is now available based on the February floods, which anecdotally indicates that the impact is significant,” she said.

“This supports the local knowledge of prior flooding on the site that was ignored by the authors of the report and Transport for NSW in building on the site.

“Projects in Chittaway, Kangy Angy and Glenning Valley were considered outside the scope of this study and were in planning several years ago when the study was first drafted, but they have progressed in the intervening years.”

“There is additional flood data from 2015 and 2020 flood events that can be used to check that the baseline data is correct,” she said.

“As an example, we have photos of a site in Palmdale in the recent February floods showing water levels almost two metres above the supposed 1 in 100 flood level.

ORRA also noted that studies in the plan “do not set additional planning controls for climate change”.

Willard said “while we recognise the scope and impact of climate change is difficult to quantify, this issue should be considered in line with the climate policies of Council”.