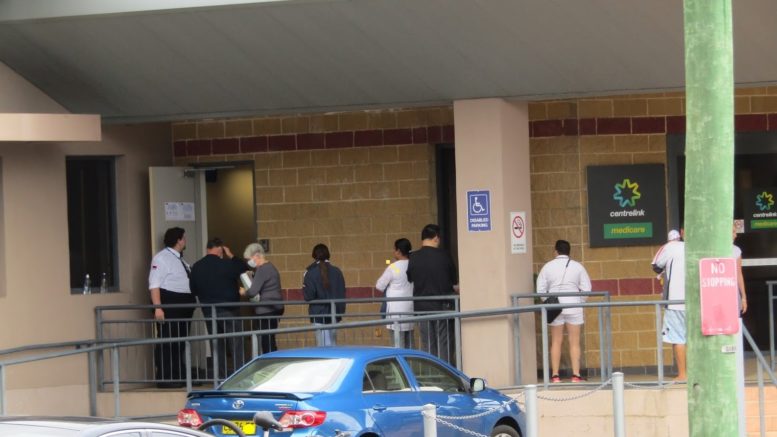 A steady stream of clients filtered into the Gosford Centrelink office on March 24. Image: CCN Media

Latest figures from the Australian Bureau of Statistics (ABS) show the Central Coast fared well as far as job losses went during the month of April compared to other regional areas, but the figures could be deceptive, says Business NSW Central Coast Regional Director, Paula Martin.

The figures showed the Coast recorded a 5.7% decrease in jobs from March 14-April 18, which seems to stack up reasonably well against the state figure of 6.9% and the 7.1% decrease recorded nationally.

But Martin said the Coast still had the State’s third highest unemployment rate of 6.8%.

“Looking at the fall in hours worked is equally important to the unemployment rate,” Martin said.

“If the fall in hours were fully accounted by fewer employed persons than remained in the labour force, the NSW unemployment rate would be around 13 percent, and the Central Coast higher.

“JobKeeper has contained the number of persons classified as unemployed.

“On the Central Coast over 12,000 people are on JobKeeper.

“If we were to look at the changes to hours worked, this is equivalent to one in ten people no longer working.

“The pace at which the economy opens up and the speed of consumer spending again will be key to recovery.

“This industry employs over 10% of our locals.

“Whilst the data shows further declines in jobs and wages, it suggests that the most aggressive declines are over.

“We can expect to see the biggest hit to the economy in June, with the RBA expecting the economy to start bouncing back in the September quarter.”