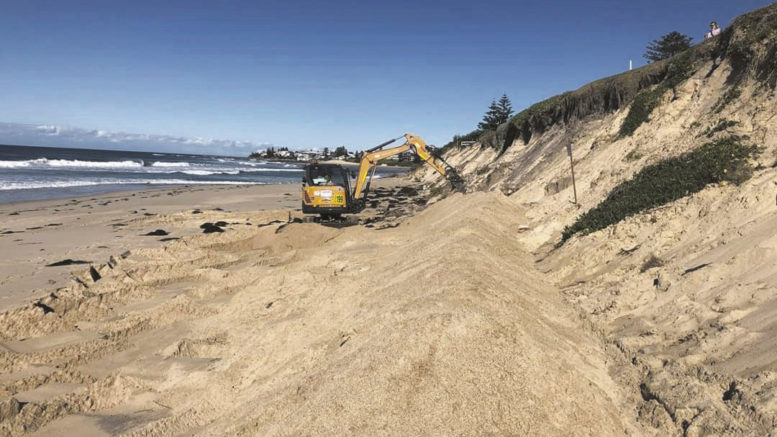 About 30 properties along North Entrance Beach have been battered by wild seas over the past couple of months causing severe erosion and unstable sand dunes in front of houses.

It has reignited the debate about the rights of beachside property owners to shore up their properties and who should bear the cost.

Residents describe the slipping shoreline and unstable sand dunes as the worst it’s been in the past 20 years.

Central Coast Council has been reinforcing the dunes and at its June 9 meeting, Council decided it will provide suitable approvals for residents to carry out emergency beach stabilisation works to protect their properties.

However, residents will have to pay for the works themselves.

“These people are just one East Coast Low away from losing their houses,” Cr Greg Best said.

Eventually the Urgency Motion was lost, however, Deputy Mayor Jane Smith, who was in the Chair at the time, allowed the matter to be put forward anyway, but not as a matter of urgency.

Cr Jeff Sundstrom asked if the Motion would make any difference to residents at North Entrance Beach.

“Council staff are already on the job with emergency action and are already working and liaising with other agencies to do what can be done,” he said.

“My question to staff is: Does the Motion change the way you would be acting in relation to this erosion episode?”

Cr Doug Vincent added: “Is there real concern that houses might slip into the sea?”

Director Environment and Planning, Scott Cox, said residents were saying that they hadn’t seen this sort of erosion since 1997.

He said by adopting Cr Best’s Motion it would require staff to advise residents of what action should take place and what was the best way forward and whether development applications might be needed.

“Our staff have been in contact with residents nearly every day this week and this resolution would give staff the impetus to go back again to residents and have those conversations.

“We have been scraping out sand with machinery and putting it at the foot of the dunes and staff are monitoring how quickly the dunes are regenerating.”

It is possible that this work will continue over the winter months to help the natural recovery of the dunes.