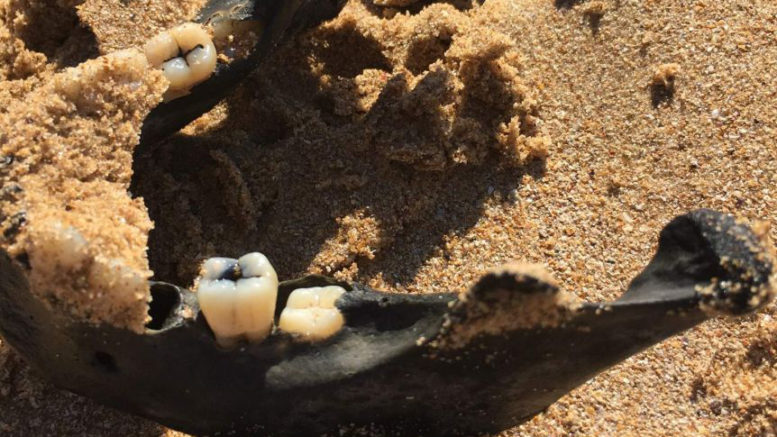 The mystery of the Umina Beach jawbone could take months to unravel Photo: Toyah Evans

An investigation is underway after a jawbone was located at Umina Beach.

Woy Woy resident, Toyah Evans, made the gruesome discovery whilst walking her dogs along the beach on Thursday, June 11.

Realising the gravity of her find, Evans secured the remains in a doggie bag before reporting it to Brisbane Water Police.

The bone was then sent to Newcastle Mortuary for examination where it was confirmed what was uncovered was indeed a human jawbone.

A crime scene was established the following day and a team of specialist police, including a cadaver dog, began scouring the beach for other possible remains.

Brisbane Water PD Chief Inspector, Steve Laksa, told media at the scene that it was too early to tell exactly how long the bone may have been on the beach, or where it came from, with the results of further forensic analysis critical to the investigation.

“The jawbone has been conveyed to Newcastle Forensic Medicine where further examination will be conducted to determine how old it is and its possible origins.

“There are indications that the jawbone has been exposed for a period of time and part of our investigations will include our missing persons registry.

“At this stage nothing indicates that the location of the bone is suspicious, but we’re just keeping an open mind in relation to the jawbone, but really the investigation will hinge on the forensic analysis to determine where the jawbone has come from,” Ch Insp Laksa said.

Police are hoping dental records and DNA will shed some light on the investigation, but according to Ch Insp Laksa, it could be weeks before results turn up any concrete leads.

As the investigation continues police have urged all beachgoers to be on the lookout for possible other bones that could assist them with their investigation.

No other remains have been uncovered thus far.

Local yoga group show our green spaces are ‘anything but lazy’