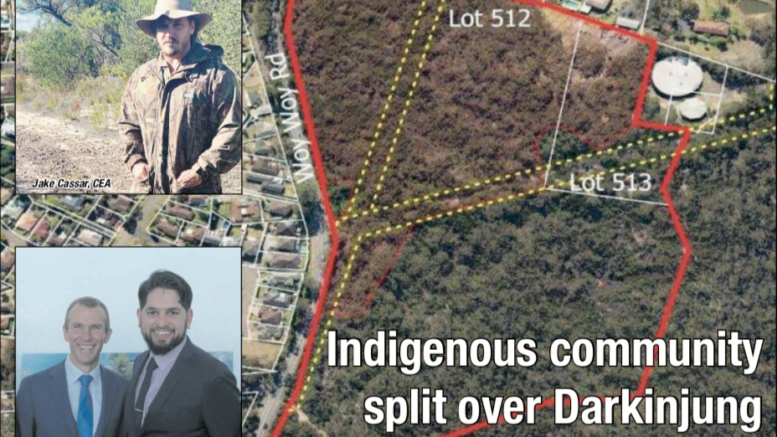 Darkinjung Local Aboriginal Land Council (DLALC) has hit back at claims by community group Coast Environmental Alliance (CEA) that its proposal for a major housing development on Woy Woy Rd at Kariong is “disgraceful”.

CEA founder, Jake Cassar said he was alarmed at the lack

of community consultation on the proposal, which would see 70 properties developed on what he says is an extremely ecologically and culturally sensitive area.

“They are planning to clear an area of largely untouched bushland right next to the area known as Bambara, with the majority of the site being surrounded by National Park,”

Cassar said.
“This is the area that our

community battled for years to have protected in the surrounding National Park.

“Both the Aboriginal and non- Aboriginal community worked tirelessly side by side for many years to eventually have this area listed as a National Park, and after around a decade of community actions, we

protected and registered as Kariong Sacred Lands, due to it being an Aboriginal site of significance – the DLALC themselves nominated the area for declaration as an Aboriginal Place to ensure recognition and protection.

According to Cassar, the Bambara area is internationally famous and attracts thousands of tourists each year with the Kariong Egyptian-style Hieroglyphs featured on the History Channel.

“If this proposal were to go ahead it would come within 20 metres of known Aboriginal engraving sites.

“It could also potentially damage or destroy existing sites that have not yet been discovered and open up the entire landscape to damage and erosion from human and vehicular traffic.”

While Cassar said he appreciated that the DLALC has a focus on economic growth to benefit its members, he was sure there were other options for development.

“This part of Kariong is full of threatened flora and fauna, some of which include the Powerful Owl, the Spot-tailed Quoll and the Glossy Black Cockatoo, and is in the locality of known koala habitat,” he said.

“There are also endangered ecological plant communities known as Hanging Swamps in the area; these are listed as endangered due to the vital role they play in providing water to the overall landscape.

CEA member and one of many Aboriginal supporters of the group, Celeste Carlson,

said she was “shocked and disgusted” by the plan.

“Our community is very distressed about this development and has strong concerns that the rezoning has been snuck through without any consultation,” Carlson said.

“My friends and family in the local Aboriginal community were all unaware of Darkinjung’s plan to exploit this area which is in the vicinity of registered and protected Kariong Sacred Lands.

“I speak for many when I say that this will cause damage to relations in our community and is totally unsustainable for the ecological and cultural landscape.”

But DLALC says its proposal would see more than half the site safeguarded for environmental conservation.

Chairperson Matthew West said 7.1ha of the 13.2ha site would be zoned E2 environmental conservation, making it an untouchable green space to protect the

“The proposal would preserve more than half the site in its pristine ecological state for people to cherish and animals and plants to flourish for generations to come,” West said.

“We seek to develop the remainder of the site for residential housing that will help us realise the community, economic and social aspirations we have for our people and the broader community of the Central Coast.”

West said a small, isolated section of the community had criticised the proposal because it is on land located in the proximity of the sacred Aboriginal site of Bambara and is surrounded by National Park.

“By definition, all of Kariong is close to Bambara and surrounded by National Park,” he said.

in a pre-colonial context. “We are a community that exists in Australia today and we have very complex needs as a result of the European colonisation process – a process that for a long time excluded us from

contemporary Australia.” West said the Land Council was working closely with the State Government to develop a new planning framework to provide Aboriginal people with greater ability to determine the use of their land.

The suite of measures includes an Interim Development Delivery Plan that is a pipeline of sites that Darkinjung has prioritised to realise its economic, cultural and conservation aspirations.

“The Kariong project is one of a number Darkinjung has at various stages of assessment in the delivery pipeline, including proposals at Somersby, Wallarah and Lake Munmorah that total 331.5ha of its land,” he said.

“Of that land, 64% (213ha) is earmarked to be zoned environmental conservation and kept as green corridors.

“The remaining one third we hope to use to build homes, create jobs and secure education and training opportunities for not just Aboriginal people but everyone on the Central Coast.

The Kariong Planning Proposal is being assessed by the Hunter and Central Coast Regional Planning Panel.

Earlier this week, high profile DLALC Executive Kevin (Gavi) Duncan blasted the CEA on Facebook saying “All aboriginal people on the Coast should rally togther to counteract the racist attacks being made by Jake Cassar and his redneck followers.”

Cassar did not react to those comments but, separately, said many were unclear as to how community members could have input to the decision.

“We are concerned that this extremely sensitive area will be rezoned without the community having any say, and then when it is eventually put out for the public to make a submission, it will be approved due to new zoning permitting the development,” he said.

He said the group hoped to work with DLALC to support world class sustainable development while ensuring the protection of “precious local bushland”.

He has urged concerned residents to make their views known to Member for Gosford, Liesl Tesch, and Planning Minister, Rob Stokes.