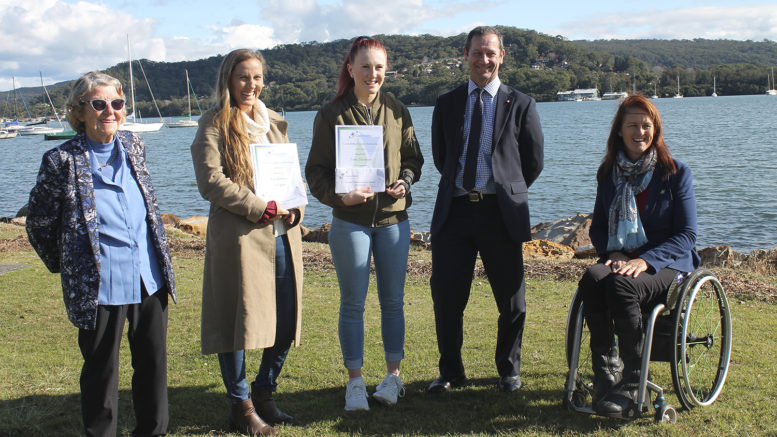 Wamberal’s Rae Anderson and Jilliby’s Tahlia Blanshard were confirmed as the inaugural scholars at a special presentation ceremony at the Gosford waterfront on June 22.

Both athletes live with cerebral palsy and through these scholarships have each received $10,000 to put towards their education and sporting endeavours, with Gosford MP Liesl Tesch, and David Booth OAM, on hand to present the scholarships.

Anderson is already a para athlete of international standing.

The 23-year-old has represented Australia at the 2016 Rio Olympics in javelin and discus, as well as the 2017 London World Para Athletics.

She’s also a force to be reckoned with on the slopes and trains in the Slalom, Giant Slalom and Super Giant Slalom events and narrowly missed out on a handful of podium finishes at the recent 2019/20 Colorado World Para Alpine Skiing tournament.

Now in training for the 2021 Tokyo Paralympics and Winter Paralympics, Anderson is well on her way to representing Australia at the summer and winter games.

She’s also completing a Bachelor of Arts – Indonesian and Asian Studies (Double Major) with the University of Sydney.

She’s also on track to compete at the 2021 Paralympics and is balancing her Olympic ambitions with a Bachelor of Health Science (Exercise) at the Australian College of Physical Education.

Specialising in providing financial assistance to young people whose disability needs go beyond what is available through the National Disability Insurance Scheme, CoastAbility is one of the oldest disability support charities on the Central Coast.

Director Gwenda Williamson said the organisation was thrilled to be launching its inaugural scholarships with two such worthwhile recipients.

“Tahlia and Rae were both such outstanding applicants that CoastAbility felt very strongly that we were privileged to be able to support them,” Williamson said.

“The program was intended to be two separate $5,000 scholarships but when we received Rae and Tahlia’s applications, we made the decision to up the number to two of each and award one of each type of scholarship to the girls,” Williamson explained.

Williamson said the charity felt comfortable doing this as the situation with COVID-19 had not impacted CoastAbility’s finances.

With the program set to return next April, Williamson is encouraging all young people living with disability on the Coast to consider what a CoastAbility scholarship could do for them.

Application period for CoastAbility Scholarship extended to May 31