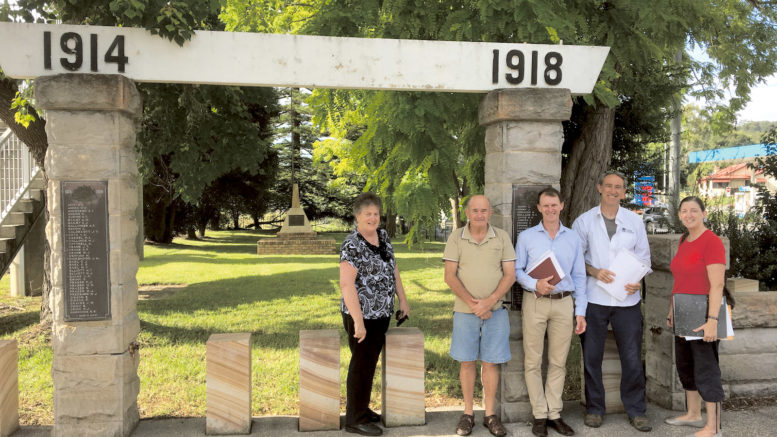 Ourimbah First World War Memorial on the eastern side of the station may be saved.

Ourimbah RSL Sub-branch has met with Transport for NSW staff in a bid to save the historic war memorial from removal as part of the railway station upgrade.

A meeting was held at Ourimbah station on May 27, when Sub-branch Secretary, Barbara McNab, lobbied to make sure the memorial was protected.

The memorial was built in the 1920s and displays the names of Ourimbah locals who served during the First World War.

An archway opens to a garden and is an important part of the local heritage.

The Entrance MP, David Mehan, who also attended the meeting, said plans released by Transport for NSW for the station upgrade would lead to the destruction on the war memorial.

“Plans indicate that the eastern wing wall of the memorial archway will be removed to accommodate a wider pathway to lifts which will be installed on the existing footbridge,” he said.

“While the station upgrade and lifts are welcome, destruction of the war memorial is not,” Mehan said.

“Local heritage protection is important for our Ourimbah community, which already resisted efforts by Transport for NSW to demolish the station master’s residence in 2016.

“The new lifts and pathway can be accommodated without the need to remove part of the memorial,” Mehan said.

A statement from Transport for NSW says the current concept design for the upgrade includes a connecting path for access to the new lift which might require a small section of the dwarf wall to be relocated.

“Transport for NSW understands that the eastern dwarf wall is an important part of the World War I Memorial Garden and is committed to working with Ourimbah RSL to develop a strategy to avoid potential impacts to the monument while this important upgrade work is completed,” a spokesperson said.

It was indicated that the potential for design amendments would be investigated, in consultation with Ourimbah RSL, during the detailed design stage of the project.

Community feedback on the project, which closed on June 3, is now being reviewed by the project team and will be responded to in a Determination Report to be published on the Transport for NSW website.