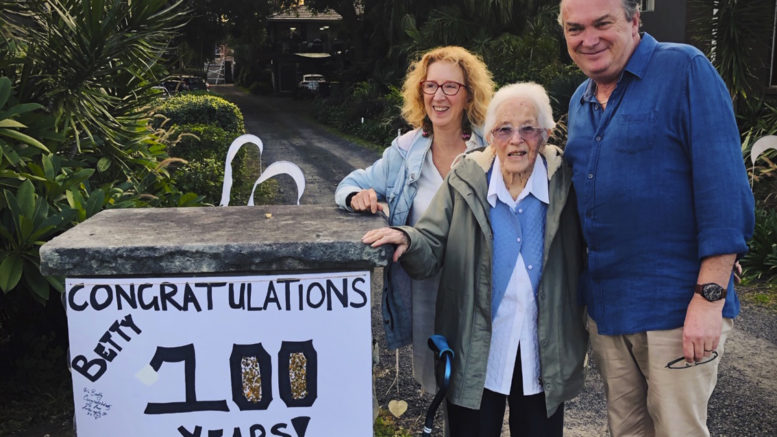 She might be 100 years old, but Ms Betty Smith of Ettalong still has all her own teeth, a wicked sense of humour and an able body, according to granddaughter Ms Beth Pupovac.

“Her mind is not what it once was, but dementia has allowed her to sail through recent times, oblivious to the happenings of the world and remain her happy and positive self,” Ms Pupovac said.

“She is truly the most remarkable woman, loved by all who know her.”

Bessie “Betty” Eileen Smith (nee Gibson) was born on June 9, 1920, growing up at Ryde alongside sisters Noreen and Janette, both of whom have predeceased her.

She has lived through turbulent times, including the Great Depression and World War II.

“She lost her younger sister, Janette, who died age 17, and six years later lost her mother too,” Ms Pupovac said.

“Despite many of the trials nan faced, she has always spoken very fondly of her life and the memories of these times.

“She was an avid traveller and saw much of the world, choosing to travel overseas with a friend as opposed to focusing on ‘settling down and starting a family’ like so many other women during this time.

“She married Mr Claude Sargent Smith on her 36th birthday.”

“She grew up watching sports with her Dad, played tennis with her husband Claude and as a couple they went dancing every Saturday night until they were in their 80s,” Ms Pupovac said.

“Her life and health tips have always been: Take deep breaths, lie flat on your back at some point during the day, sit quietly and never skip dessert or a cup of tea.”

In 2010, Mrs Smith relocated to Ettalong, where she still lives with her only child, daughter Ms Claudia McLeod, and her son-in-law, Mr Bill McLeod.