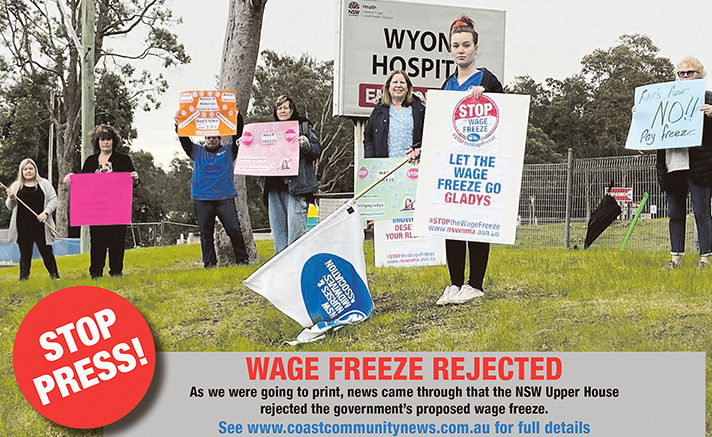 Nurses and Midwives protest a NSW State Government proposal to freeze their legislated wage rise out the front of Wyong Hospital.

Almost 15 percent of the Central Coast workforce will be affected by the 12-month wage freeze for public servants announced on May 27 by NSW Premier, Gladys Berejiklian is passed by the government.

STOP PRESS UPDATE: NSW Labor with the support the cross bench has successfully fended off the State Government’s attempt to put a wage freeze on a pay increase due to public servants. The State Government wanted to defer for 12 months a 2.5 percent wage increase which was due to public servants from July 1. That move was blocked by the Opposition, with support from the cross benches, in the Upper House on Tuesday evening, June 2.

Unions representing the public sector, including nurses, teachers, cleaners, police and firefighters,say it is“disgusting” and “insulting” that the State Government decided to not go ahead with a 2.5 percent pay rise expected on July 1.

Wyong Hospital branch President of the NSW Nurses and Midwives Association, Katrina Bough, says nurses everywhere are appalled by the government’s wage freeze and then an attempt to silence them with a $1,000 payment.

Both nurses and teachers say that offer adds insult to injury following the huge amount of work and sacrifices made during the coronavirus crisis.

In a second round of peaceful protest rallies, members of 60 branches of the NSW Nurses and Midwives Association across the State were out again on June 2 to show that they reject the government’s plan.

Premier, Gladys Berejiklian said the freeze would save taxpayers about $3B and enable the government to focus on preserving existing public sector jobs while also stimulating job creation, as NSW confronted the prospect of a deep recession and contraction of the economy.

Shadow Minister for the Central Coast, David Harris MP, said Labor would battle to protect the wages of 16,343 Coast workers, about 4,000 of them in the northern suburbs, by putting up a Motion to block the wage freeze in the Upper House when State Parliament sits on the week commencing June 1.

When Berejiklian made the wage freeze announcement, after weeks of dodging questions on the issue, she said “the only way that NSW will come out of this crisis in a strong position is if we all make sacrifices, and that’s what we’re asking our own workforce to do, because we are all in this together”.

Treasurer, Dominic Perrottet, said it was a “tough decision”,

but nearly 90 percent of the state’s workforce is in the private sector, and many of them have already suffered forced stand downs, leave without pay, significant pay cuts, job uncertainty or losing their livelihoods altogether.

But Opposition leader, Jodi McKay, said “this is a kick in the guts for public servants like health workers, teachers, bus and train drivers, cleaners, security guards and many more who have been heroes during the pandemic.

“They deserve a medal, not a pay cut.”

Deputy Opposition Leader and Swansea MP, Yasmin Catley, said the Premier had abandoned the very workers this state relied upon to get

through rolling disasters. “This is not only a disgraceful betrayal of those workers but little more than economic vandalism,” she said.
Member for Wyong, David Harris, said that at a time when communities were struggling, taking wages from the pockets of almost 17,000 workers on the Coast was wrong.

“Over three years, this wage freeze will rip $71M out of the Central Coast economy,” Harris said.

“We are very concerned that this is money that could have been spent in the Coast economy, and this pay freeze is effectively robbing local businesses of that income as they try to come back after the COVID-19 restrictions.

“And without that pay increase, the public servants’ wages are actually going backwards because they’re not keeping up with inflation, and the other issue is the loss of extra superannuation, so they are being penalised twice.”

NSW Nurses and Midwives Association General Secretary, Brett Holmes, said the government was disingenuous to suggest that it was “deeply grateful” for the efforts of nurses and midwives, then refuse a modest 2.5 percent pay increase.

Association member, Meg Pendrick, who was at the protest on May 27, said she believed the community was behind the health workers in demanding their “legislated wage rise”.

“Most of our members live and work on the Coast,” Pendrick said.

“Not only are we coping with a changed workflow, we are also coping with a rise in anxiety of our patients, our families and ourselves.”

Fellow association member, Michelle Cashman, said the decision was “disgusting” and an “absolute insult” to health workers, whose lives had been severely impacted by the coronavirus pandemic.

“Our lives have been so affected by this and because we are in the front line our families are extremely anxious,” she said.

Meanwhile the NSW Teachers Federation said the news was a blow as teachers returned to full time face to face teaching.

Federation President, Angelo Gavrielatos, said the virtual pay cut was disrespectful of the role of teachers and principals who have “turned themselves inside out to deliver the highest quality of education for students during the COVID-19 crisis”.

“This is hardly the recognition teachers and principals deserve after the extraordinary efforts they have made to maintain educational continuity for our students during these unprecedented times,” Gavrielatos said.