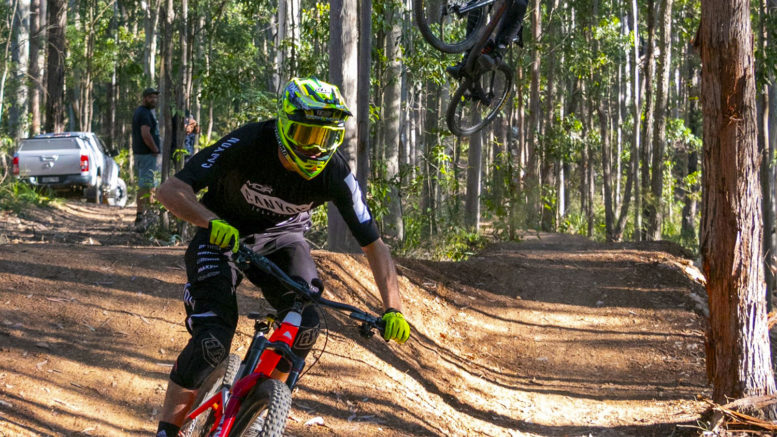 Members and special guests gathered at Ourimbah Mountain Bike Park on June 19 for the opening, as well as the unveiling of the trail’s official name, ‘Centrelink Trail’.

The extension was completed as part of a number of improvement projects planned for the Park and was needed to streamline the trail’s overall purpose as a technical and highspeed challenge suitable for intermediate and experienced riders.

Funding for the project was provided by the State Government under the Community Building Partnerships grant scheme, with support from Wyong MP, David Harris, and land partners, Forestry NSW.

CCMTB President, Paul Cook, launched proceedings with recognition of the Darkinjung people and of the extensive cultural heritage contained within the park, located within the Ourimbah State Forest.

Cook said that the success of the park came down to the hard work of CCMTB Committee members and their excellent relationship with Forestry NSW.

He also thanked Harris for his ongoing support of the facility and the mountain bike community at large, before explaining the meaning behind the trail’s name.

“As a community focused club, the CCMTB used the grant funding to support local workers who had been affected by the COVID-19 downturn.

“Key to selecting contractors was a conscious effort by the committee to help local businesses by providing paid work during restrictions.

“The name ‘Centrelink’ stems from the drive to financially support local mountain bikers through these difficult times,” he said.

With the extension completed, Cook said the committee hoped that the Ourimbah Mountain Bike Park’s popularity throughout the pandemic would serve as a wakeup call to local government representatives on the urgent need for more mountain biking infrastructure.

“The new Centrelink trail will add to the competitive facilities and will expand the trail quantity and diversity of Ourimbah Mountain Bike Park, whilst also building upon its reputation for hosting competitive events.

“We had an estimated 500 riders through the park everyday over the June long weekend, and the CCMTB believe that mountain biking urgently requires further infrastructure investment to meet the booming demand for the sport and increased visitation rates,” Cook said.

Cook then called on Central Coast Council to support the volunteer run CCMTB Committee, who he said was straining under the burden of managing and maintaining the Ourimbah Mountain Bike Park as the sport’s popularity continues to grow at an unprecedented pace.

“The entire CCMTB Committee calls on Central Coast Council to get behind mountain biking as a form of recreation and to provide easily accessible infrastructure for all local mountain bikers across the Central Coast by utilising COSS lands.

“Mountain biking is an environmentally sensitive form of nature based recreation that can aid the health and wellbeing of everyone.

“The club invites all riders to come to Ourimbah Mountain Bike Park and enjoy the trails,” Cook said.