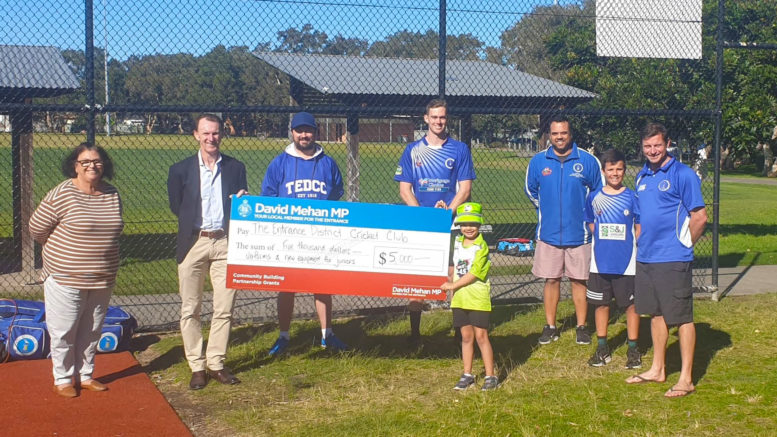 The Entrance District Cricket Club has received a $5,000 grant from the NSW Office of Sport.

The Entrance MP, David Mehan, delivered the funding on June 20, with the monies to be put towards new uniforms and team kits for the 2020/21 season.

Ken Gough, the Club’s Executive Secretary, said the funding would go a long way towards keeping morale high in the off season.

“We amalgamated our seniors and juniors into one big club and also launched our first senior ladies’ team, so we had a lot of need for uniforms and kits,” Gough said.

With the funding secure and preseason still a way off for cricket, Gough said the club was now in standby mode as modified grassroots sport unfolds across the Coast.

“The club was fortunate in that our season was already over when COVID-19 restrictions came into effect, so for the most part we’ve not been impacted by the current situation,” Gough explained.

With cricket’s preseason to commence in August, and the season proper to start in September, Gough said that there was some concern about how the 2020/21 season would pan out, but he was adamant that his club would overcome any challenges as they arose.

“At the moment, we do have some concern about sponsors.

“We haven’t lost any, but we are expecting that some won’t be able to support us in the same capacity as they have previously,” Gough said.

When training resumes, equipment sharing will also become a point of concern, but Gough believes that the club will have a strategy in place by then to manage any potential risks.

The intersection of the delayed winter codes’ competitions and the start of the summer codes’ season is also on the club’s radar.

“At some point, there is going to need to be a handover between the winter and summer codes.

“Central Coast Council has done a great job in coordinating codes and venues given the circumstances, but there is going to need to be some give and take between the codes,” Gough said.

With cricket predicted to be starting later, Gough said he wouldn’t rule out the possibility of a blanket push back of summer code start dates to accommodate for the delayed winter season, but admits that the logistics of that decision were beyond the scope of any one code to make.

Regardless, he said that when the time comes, The Entrance District Cricket Club will be doing all that they can to ensure that its players get the most out of the upcoming season.

“We’ll do our best to make sure that we have a full competitive season and that our members can play as much cricket as possible.

“We fully expect to be starting later and would be happy to finish later, but it remains to be seen if cricket will have a shorter season, so once preseason begins, we will continue with preparations and adjust as the situation unfolds,” Gough said.

Mariners get back into training

Another $16M pledged for Coast roads