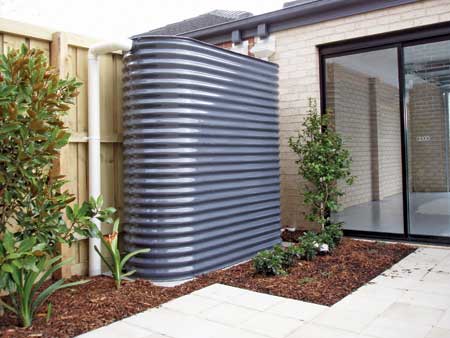 An idea for a rainwater tank pilot program will be delayed until Central Coast Council completes its Integrated Water Resource Plan in 2021.

But evidence is emerging that rain water tanks (RWT) and supporting devices may not be maintained in the long-term and that customers will bypass their tanks when future renewal of key items such as pumps are required.

“Depending on the nature of the RWT system, pump renewal costs can be in the range of $500 to $1,000,” a report to council stated.

Cr Kyle MacGregor asked council last year to study the feasibility of installing water tanks across the Local Government Area at a discounted rate for pensioners and potentially other low income groups.

He wanted to encourage the capture and collection of water for domestic consumption.

The report back to council this month explained that in total, about 25,000 rain water tanks, with about 50 per cent of those connected internally, were assumed to be supplementing the town water supply on the coast.

This represented about 22 per cent of total connected properties.

Councillors were told implementing a large scale subsidised water tanks program was being considered as part of the shortlisted options for the Integrated Water Resource Plan (IWRP) but a summary of the key findings from a Sydney Pilot Rainwater Tank Assessment Service found about 60 per cent of systems were working efficiently and about 15 per cent were not functioning at all with the majority of those due to faulty pumps which cost an average of $1,300 to fix.

It found the payback period for pump renewals was about 10 years resulting in a lack of willingness to pay within a surveyed group.

“Potable water costs are too cheap to allow a financial incentive for utilisation of rainwater,” the report stated.

The report concluded the roll out of a previously considered large scale RWT rebate program on the coast had an estimated cost of $250M and there were likely other options that would provide similar or better additional water supply augmentation outcomes at a lower cost.

“This will be understood following the completion of the Integrated Water Resource Project,” it said.

It identifies how to further enhance the water supply system; how to continue to use water as efficiently as possible and how to develop additional future sources of water for the region.

A report on the status of the plan was received at the same meeting as the rain water tank update but Cr Louise Greenaway was not satisfied with the report.

She was seeking to find out what council was doing at the moment behind the scenes in preparation for future droughts.

She said the report didn’t showcase the particular positive stories of the major projects being undertaken so the community could see the council was way beyond just introducing water restrictions.

Cr MacGregor said he believed the directorate of water and sewer was doing good work and he too believed council should be talking them up.

Water security also came up in a third agenda item at the same meeting.

The third item was a report to provide Council with an update on the implications of the defeat of the Central Coast Water Protection Bill and the status of the Wallarah 2 coal mine.

The NSW Department of Planning Industry & Environment granted consent for the proposed Wallarah 2 Coal Mine on January 16, 2018.

The conditions of consent included a compensatory mechanism in an attempt to offset potential reductions in stream flow within the drinking water catchment of the coast.

It requires that 300 ML /annum be provided to the catchment as an initial minimum volume and this could change subject to the outcomes of the required monitoring programs.

Council objected to the proposal for the underground longwall mine to extract thermal coal for up to 28 years for fear of its Impact on water supply, groundwater and surface water as well as subsidence and water quality during the construction phase.

The Central Coast Water Protection Bill which attempted to stop the mine was defeated in State Parliament last year.

Council said the defeat of the Bill meant that Council continued to rely on the successful implementation of the Conditions of Consent, in particular the monitoring and associated compensatory water arrangements.

“These are required to manage risks to the quantity and quality of water available from the catchments of the Wyong River and Jilliby Creek,” the report said.

Speaking only about the water resource plan, Mayor Lisa Matthews said after the meeting that water security and future community needs was an issue that remained a high priority for Council.

“The water needs of a growing Central Coast population means that a blueprint of how to achieve long term stability is an absolute necessity,” Mayor Matthews said.

“The Mardi to Warnervale Pipeline construction is an example of our significant investment in this vital area, and we will continue to work closely with other stakeholders such as Hunter Water to ensure we rise to meet the challenges of water security.”