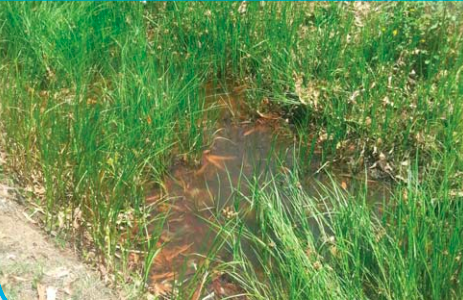 Kanwal residents photographed the overflow from a nearby sewerage station in the unsealed gutter at the front of their home. Archive June 2018

Upgrades to the sewerage system at Kanwal will be investigated after Wyong Ward Councillor, Kyle MacGregor, successfully raised the issue at the latest council meeting.

Cr MacGregor received unanimous support from colleagues when he asked for a comparison of investment in Kanwal sewerage to the rest of the Central Coast.

The decision asks CEO, Gary Murphy, to list the overflows and issues with the sewerage system in Kanwal that required rectification work since 2010.

Cr MacGregor also wanted to know the methodology of the maintenance of the sewerage system and reporting requirements for staff and contractors around community complaints on sewerage issues and response to emergency overflows or problems with the network.

In quite a detailed list of questions to be answered, he included the impact of ‘fatbergs’, root system destruction of pipes and the causes of problems requiring maintenance on the sewerage system, including examples of when damage occurred and was responded to.

A fatberg is a congealed mass in a sewer system formed by the combination of flushed non-biodegradable solid matter, such as wet wipes, congealed grease or cooking fat.

The report is to include the cost of recent work that was conducted by contractors or staff during 2019 on the sewerage network.

Cr Macgregor was seeking to collect historical information about the performance, maintenance and investment in the sewerage system in Kanwal.

“I have raised these issues in the past after residents have contacted myself and other Councillors about issues with overflows and problems with the system that seem to stem from a change in maintenance regime and lack of investment and development of the network,” he said.

“I believe that the lack of investment and attention to a suburb like Kanwal is indicative of the approach of governments towards our working class suburbs across our region for far too long.

“This is something I have vigorously opposed during this term of Council and I have consistently attempted to allocate extra funds and investment to suburbs in our working class suburbs across the local government area, where ordinary locals live, and away from suburbs that traditionally receive an inequitable and egregious amount of government funding and spending.

“With COVID-19 and the historical mismanagement and malprioritisation of economic resources from all levels of government in the past, we are now in recession, and governments need to spend money on infrastructure, job creation and community building projects.

“We have an historic opportunity for Council to invest in our water and sewerage network for the long term benefit of the people of our region.”

Cr MacGregor said it should be a core responsibility of Council to provide high quality infrastructure and jobs for locals.

“The last thing we need is another strategy or plan that doesn’t go anywhere, or spending on vanity projects for ribbon cutting opportunities for local politicians,” he said.

“Whilst I understand that there are lots of views over how to recover from the twin health and economic crises imposed on our local community, it is my belief that we have an historical opportunity to improve the basic human services and infrastructure that Council provides to residents such as our water and sewerage supply and community infrastructure”.

“Surely an organisation with an annual budget over $870M can afford to provide water security and decent sewerage infrastructure for a region of over 340 000 people.”

Staff said that they can report back to Council at the August 10 meeting.

Memorial facelift paid for by state and federal grants