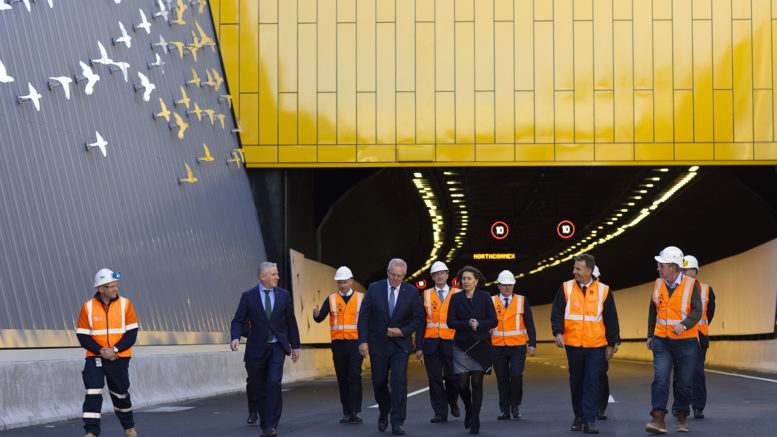 Parliamentary Secretary for the Central Coast, Adam Crouch, joined Prime Minister Scott Morrison and Premier Gladys Berejiklian earlier this week for a sneak peek at NorthConnex, set to shave 15 minutes off the Coast to Sydney drive as commuters and heavy vehicle drivers express concerns over “excessive” tolls on the new motorway.

The first end to end drive through of the $3B project was hailed by state and federal politicians as a major milestone, with the tunnel set to open in the next few months.

Crouch said NorthConnex is the longest road tunnel in Australia and innovative lighting features like starry skies and tree silhouettes have been installed to keep drivers alert on the nine kilometre journey.

Member for Robertson, Lucy Wicks, said the tunnel would save Central Coast commuters up to 15 minutes in travel time, while avoiding more than 20 sets of traffic lights along Pennant Hills Rd.

“In addition to busting congestion the NorthConnex project has also been a key job-creator,” Wicks said.

“It will take pressure off local roads and improve community safety by taking up to 5,000 trucks per day off Pennant Hills Rd.”

Prime Minister Scott Morrison said NorthConnex has already been a game-changer with construction powering ahead and creating 8,700 jobs.

But Central Coast Commuters Association Vice President, Eddie Ellis, said the toll charges were considered to be excessive by commuters, especially those who need to use the tunnel on five return journeys per week.

“The other issue of concern is that there are no rest areas or food stops on any of the major toll roads.

“If somebody had to use a couple of toll roads in succession they would have to travel long distances and times without a break.

“The Government should have established food and toilet stops along the toll roads, to allow for breaks from driving.”

The Transport Workers’ Union of NSW (TWU) is also concerned that it will cost heavy vehicle operators $23.50 per trip to use the tunnel, with no alternatives in place.

“So far no-one has provided an answer,” he said.

“Travelling the M7 and M2 with a heavy vehicle means another toll impost of nearly $40.

“The delays experienced in peak hours will also negate any time savings the tunnel might offer.

Olsen said delays experienced in tunnels on the M5 and other motorways led to doubts about how effective any congestion busting will be.

The Federal Government has committed $412M towards NorthConnex on top of a State Government’s commitment of $577M, including the use of Hornsby Quarry for spoil management.

The remainder of the funding for the project has been met by the private sector.