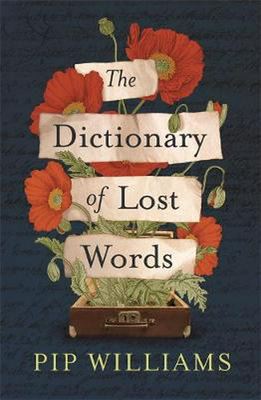 The Dictionary of Lost Words is the debut novel by South Australian writer, pip Williams.

It is set in Oxford from 1879 and based on true events surrounding the compilation of Oxford English Dictionary by a team of lexicographers led by Sir James Murray.

Murray works diligently sorting through words, researching and cross-referencing them, in the Scriptorium (the Latin word for “a place of writing”).

He and Dr. Murray, the editor, turns a blind eye to his daughter Esme’s presence given her mother has passed away and there is only her father to raise her.

Esme can be found sitting on her father’s lap, opening the mail which contains words written on slips of paper sent by volunteers or hiding under the sorting table, taking note of the assistants’ socks and shoes.

She is under the table when a slip of paper falls, it contains the word “bondmaid”.

It takes her a while to form the word – she is only five – but she takes the slip and puts it in her pocket.

No one notices the word “bondmaid” missing from the dictionary until 1901.

As it turns out, Lizzie is the bondmaid for Dr. Murray and his family, and she also helps to take care of Esme.

Esme confides to Lizzie about having a secret.

She presents Lizzie with the slip of paper, but Lizzie can’t read and so they agree to hide the paper in Lizzie’s disused trunk, under her bed.

Esme scratches “The Dictionary of Lost Words” on the inside lid of the trunk.

“My case is like the Dictionary, I thought. Except it’s full of words that no one wants or understands, words that would be lost if I hadn’t found them.”

And so, over the years, the trunk becomes the secret keeping place for a collection of lesser known words, at least lesser known to, or considered not worthy for inclusion or even “vulgar” by, the privileged and educated men who produce the dictionary.

It seems all words are not equal – the vernacular of the common women in particular is not accepted.

Esme grows up on the Scriptorium and, as she gets older, Dr. Murray entrusts her with more responsibilities.

She is sent to the Bodleian Library to check on quotations, where she is neither a student nor a scholar, and also to the printing press to drop off proofs.

Lizzie and Esme form a close relationship and, while Lizzie is quite conservative, Esme is more curious, as her world begins to open up to life beyond the Scriptorium.

To Lizzie’s dismay Esme becomes friends with Tilda, an actress and suffragette, and her brother Bill.

(I am not quite sure what Bill does besides look after Tilda, but maybe that is job in itself.)

Even though Lizzie disapproves of Esme’s new friends, she is there to help Esme pick up the pieces when things don’t work out.

Esme is also quite close with her godmother, Edith “Ditte”.

Ditte is clever and contributes words and quotes to Dr. Murray’s dictionary.

She also “lives in Bath with her sister Beth” (I smiled when I read that).

And she writes wonderful letters to Esme through the years that illuminate the pivotal events that happen in Esme’s life from someone else’s perspective.

Her frequent trips to the press brings Esme to the attention of Gareth and eventually they marry before he is sent off to fight.

Again, it is through Gareth’s letters that the reader discovers a pivotal event for Esme.

I loved the relationships Esme had with Lizzie and her Aunt Ditte.

Indeed, the book is about much more than words.

It is essentially about Old English class stratum and suffrage and, ultimately, about the sisterhood of women that come together from different walks of life.

It covers a timespan of over a century and moves along at a leisurely pace – but I never once found it boring.

And although I haven’t exclaimed to other people “oh my gosh you have to read this book!”, I really enjoyed it and found it a wonderful change of pace from some of my recent choices.