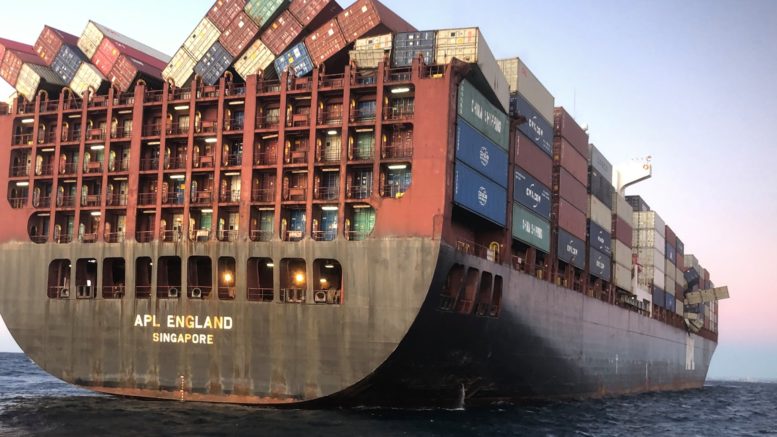 Containers crashed on to rocks at Bateau Bay

The Australian Maritime Safety Authority (AMSA) has laid charges against the Master of the APL England cargo ship which lost about 50 shipping containers overboard, causing debris and mangled shipping containers to be strewn along the Central Coast foreshore.

Charges laid by AMSA relate to offences of pollution and/or damage to the Australian marine environment as a result of poor cargo loadings.

AMSA says the ship had inadequate lashing arrangements for cargo and securing points for containers on deck were heavily corroded.

The ship had a temporary loss of propulsion and during that time it was rolling heavily, which caused container stacks to collapse and part of the load went overboard, AMSA said.

“This and other incidents remind us of the important role the ship’s Master has in ensuring that the ships that ply our waters are operated safely and do not damage our marine environment,” he said.

“The ship’s owner, APL Singapore, the insurer, Steamship Mutual, and operator, ANL, remain accountable for remediation of any impacts of this incident.

“The ship remains under detention in the Port of Brisbane and we are seeking $22M in financial security from the insurers to cover the estimated costs of a clean-up, and the ship’s serious deficiencies have to be rectified before the ship will be released.”

Schwartz said the impacts of this incident could take months, if not years, to remediate.

Five containers washed up at Birdie Beach in Munmorah Conservation Park and were salvaged on Thursday, May 29.

Another five containers crashed on to rocks at Bateau Bay, while four were floating off Norah Head, and others off Terrigal and in the Hawkesbury River.

Three tugboats were deployed from Newcastle as part of the clean-up to secure containers and tow them very slowly to Broken Bay for removal from the water and safe disposal.

One of the containers from Norah Head was lost in transit and a sea search was started.

Debris from the 50 containers, including medical equipment and facemasks, foam, food packaging, and ducting material commonly used in heating and cooling systems, was strewn along beaches from Wollongong to Port Stephens.

Seventy-four other containers were damaged in the incident but remained collapsed on deck, and AMSA’s aerial surveillance monitored containers hanging precariously on the edge.

Under the National Plan for Maritime Environmental Emergencies, the NSW Government is responsible for leading the response for any ensuing shoreline clean-ups within its borders.

“Thankfully, no hazardous materials are reported in what fell overboard,” he said.

“We have had almost 100 people working on the response, with about 80 out on the ground manually removing what is washing up.

“The owners of the APL England, and its insurers, are co-operating with what is needed in terms of resources to manage this incident,” Barrell said.

NSW Maritime is encouraging boat operators to be on the lookout for floating containers which pose a safety hazard to other passing boats.

Residents who find goods or debris are urged to report it to the NSW Maritime Info Line on 13 12 36 or by emailing incident@transport.nsw.gov.au.