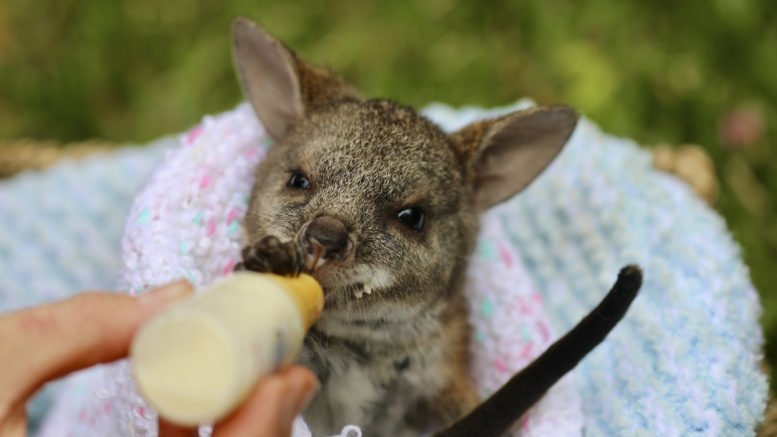 Bouddi the Parma wallaby joey is being hand raised by staff

When four month old joey, Bouddi, was abandoned by his mum in the Parma wallaby enclosure at the Australian Reptile Park, staff sprang into action.

Bouddi means “heart” in various indigenous languages and the joey’s keepers have being provide him with round the clock care and attention, including giving him a bottle five times a day (including one at 3am!).

Staff are hoping he will gain weight, grow fur and blossom into a healthy Parma wallaby.

“It comes down to both luck and passion that our staff were able to rescue little Bouddi,” Park Director Tim Faulkner said,

“The Parma wallaby population has plummeted significantly, especially with the devastating bushfires that wreaked havoc on their native habitat recently.

“The founder of the Australian Reptile Park, Eric Worrell, rediscovered the Parma wallaby, which had been presumed extinct in the 1970s.

“It is currently listed as vulnerable in NSW.

“Australia has the worst mammal extinction rate on the planet; sadly, our recent bushfires have only escalated these extremes.

“Parma wallabies are also a keystone species at our sister charity, Aussie Ark, which also has a prosperous breeding program for the species”

Faulkner said the breeding season of the Parma wallaby occurs between February and June.

“After a pregnancy of around 35 days, the newborn attaches firmly to one of four teats in the mother’s pouch, which it leaves at about thirty weeks, still suckling until approximately 10 months old,” he said.