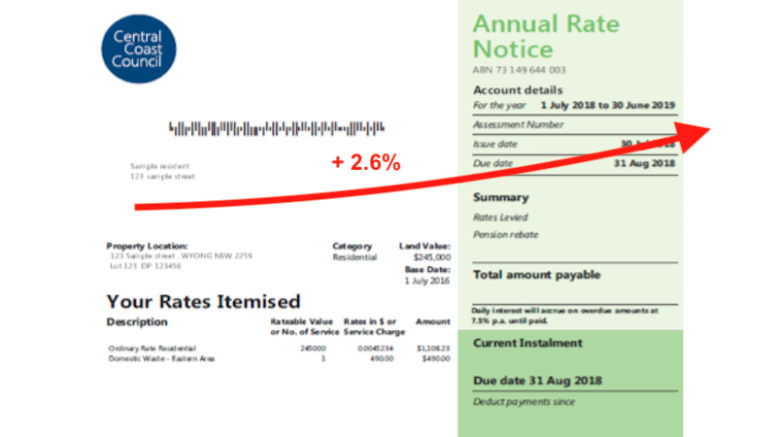 Councillors at their ordinary general meeting on June 22, voted to apply the 2.6 percent rate rise allowed by the Independent Pricing and Regulatory Tribunal.

Rate notices will include an insert on how to apply for hardship assistance when they go out to ratepayers.

The increase will take effect from July 1 and will be incorporated into the ordinary and special rate levies across both the former Gosford and Wyong council areas.

Mayor Lisa Matthews said that while the rate rise came at a time of uncertainty, Council had put in place processes to assist residents in meeting their obligations.

“It was an extremely difficult and emotive discussion, as raising rates at this time was not an easy decision,” she said.

“As a Council, we’re well aware of the challenging economic conditions that residents are currently experiencing,” Mayor Matthews said.

She said only 23 people applied for assistance the last time the rate notices went out, but council fully expected community members to take them up on the offer.

“Council remains committed to delivering on key community projects and the revenue raised from ratepayers will help us do that.”

She said that it was hard to ask for help, but even council was asking for help.

It was asking the State Government for a $400,000 grant to help pay for the cost of running the new Local Planning Panel.

The State Government imposed panel held its first meeting this month to deal with development applications that the council used to consider.

Council is forecasting revenue of $335.5M from ratepayers over the next 12 months.

The rate increase will bring in a potential addition of $4.4M in revenue from last year.

These special rates are paid in specific business areas.

A push by Crs Greg Best and Troy Marquart to keep rates at the current level was defeated.

Council will hold an extraordinary meeting on Monday night, June 29, to adopt the draft operational plan (or budget) which explains how council will spend its money next financial year.

The councillors held a meeting on Saturday, June 13, to discuss the budget, among other topics.

Cr Best alluded to the discussions, saying that they heard staggering figures and issues that would need to be managed.