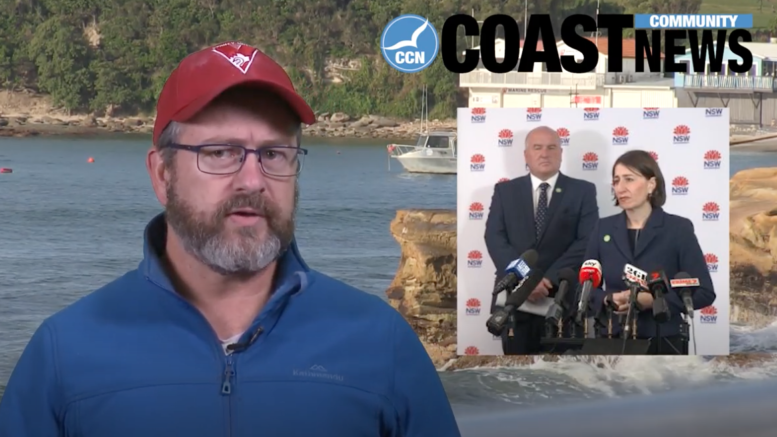 Well, that’s what Coasties may have to look forward to in coming months with confirmation this week that the NZ Warriors will be making the Central Coast their home base for the remainder of the 2020 NRL season.

That clip, of course is the 2016 golden point try by the Warriors right here at Central Coast Stadium. Its not clear yet whether the warriors will play any matches at the Stadium, but Peter V’landy if you’re watching, there’s 350,000 fans up here counting now on it.

Premier Gladys Berejiklian this week laid out the next steps in lifting social restrictions in NSW.

From today, up to ten people will be allowed to visit food-serving venues such as pubs, clubs, restaurants and cafes.

Residents will also now be allowed to gather outside in groups of up to 10 people, while the limit on household visitors will be increased to five, including children.

Weddings can now be attended by 10 people while 20 people can go to an indoor funeral and 30 can attend an outdoor one.

Up to 10 people can attend religious gatherings and places of worship.

Playgrounds and outdoor gym equipment in parks have reopened and outdoor pools will open with restrictions.

One group of people who were particularly happy to see the restrictions slowly easing were the staff at the Bon, here in Gosford.

Yes, while we were doing deliveries this morning, we saw lots of café and restaurant owners setting up for a resumption of services, usually with exactly 10 tables.

Joanne Ferguson at the Bon was preparing for a staged re-opening this morning – this is what she had to say.

One of the organisations that have been most affected by the shutdown was Coast Shelter who had to close their communal kitchen.

The team at Coast Shelter responded with the GIVIT-19 initiative, which has raised $70,000 in donations since the beginning of March.

Coast shelter have then used this money to engage several local eateries to produce fresh, packaged food for delivery and as a result, have kept many of people fed and helped some local businesses to keep afloat.

In other news, it was a big week for the Central Coast Council.

Councillors had to vote to hand over more of their powers to approve larger development applications to a Local Planning Panel or LPP, in a move mandated by the State Government.

In a strange twist, they were then accused by Terrigal MP Adam Crouch of stalling projects by insisting they go to the State’s Independent Planning Commission for assessment.

Mayor Lisa Matthews said that referring them to the Commission provided the community confidence that the proposals were being objectively assessed on merit.

The council, which has kept almost all of its service open and functioning during the shutdown also laid the first pipes in the major Mardi pipeline project and we spoke today with Lisa Matthews about some of these matters.

And there has been some angst over Council’s Local Strategic Planning Statement which calls for an audit of small parks and reserves and discussion of how they might be better used.

Five years ago, thousands of residents successfully protested against a plan by Council to sell off some 25 small parks in favour a fewer larger, regional playgrounds and there is some concern that the future of small parks around the Coast may again be at risk.

I spoke earlier with Sue Chidgey of Save Central Coast Reserves who led the charge 5 years ago.

And finally, there’s some angst in the community over recent bank closures around the Coast. Most notably, the Commonwealth Bank closed it branch at Fountain Plaza in Erina this week following earlier closures of The Entrance town centre branch and its Terrigal Branch.

The CBA did note that its newly built Erina Fair branch would open later this month.

The bank also advised us that the closures reflect a significant drop in people coming into branches during the pandemic and that staff had been reassigned to its call centre in Newcastle to help with a sharp rise in customer support calls.

Back to you Ross

Thanks David, well in news just hand, SBS have reported that Central Coast Mariners owner Mike Charlesworth is in talks with Northern Beaches Council and the NRL’s Manly Sea Eagles that could see the struggling A-League club exit Gosford for good.

Charlesworth was said to be frustrated with Central Coast Council over his ambitious bid to take over the management rights of Central Coast Stadium.

The news will come as a blow to aspiring local players as well as those working on a Coast-based W-League team.

And it’s also sure to generate a storm among the Mariners faithful who have had to endure four wooden spoons in the last six years and whom I suspect might be much happier if Mike Charlesworth just took himself off to Manly and left the club here.

On a brighter note, we’d like to leave you with a sultry serenade from one of the most popular entertainers on the Central Coast, Evan Haswell.

Evan has been performing live across the Coast’s retirement villages for the last 15 years and has transferred his talents online in recent weeks to keep his adoring fans happy.

Don’t forget to get a copy of Issue 242, hot of the press this morning for all these stories and more and be sure to visit our website and subscribe to our youtube channel

Presented by Ross Barry with David Abrahams. Film and editing by Alex Herget.