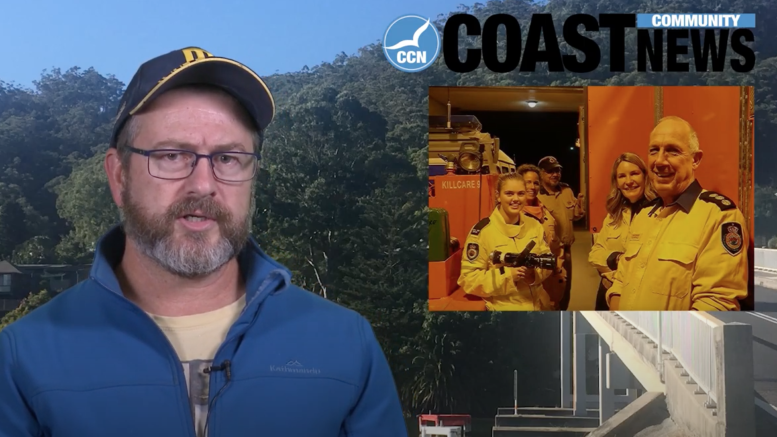 Retired Group Captain, Warwick Teasdale, of the Killcare/Wagstaff Brigade, was honoured for more than 40 years of service.

Warwick first joining the brigade in 1976, and has held a variety of positions, including Group Captain for the Gosford District in 1999.

In addition, Captain William “Jock” Ross and Senior Deputy Captain, Alison Wade of Spencer Brigade, have each received the Commissioner’s Commendation for Bravery for the heroic rescue of a resident and his dog from a house fire on April 1, 2019.

Central Coast councillors will vote on Monday, May 11, on a State Government directive to implement a local planning panel to decide on development applications.

The handover of planning approval responsibility has been a highly contentious issue with concerns about by-passing of community consultation on large developments.

The State Government have already taken away councillor’s power to decide on regional or State-significant developments and, given smaller applications are dealt with by council staff under delegated authority, the directive means that councillors would no longer decide on any development applications in the region.

We  asked Chris Holstein for his reflections.

Over to David Abrahams…

Well another important debate before Council was over a proposal by Councillor Gale to investigate whether developer contributions could be “borrowed” by Council for funding of operational activities given the decline in cash balances since the onset of the pandemic.

The CEO Gary Murphy said the short answer was no and Cr Kyle MacGregor called the idea “economic vandalism” and said the contributions were restricted for a reason – to be used for parks and footpaths and the like.

Environmental Justice Australia are joining six community groups to submit a request to the EPA to conduct a detailed investigation into air pollution at the Delta Electricity Power Station at Vales Point.

I spoke earlier to Nicola Rivers.

The Council’s plan involves installing 3 metre high mesh fencing on both sides the bridge but Association president, Mr Ken Stewart, said the mesh would not stop people jumping as it could be easily gripped and climbed.

And finally, nine Peninsula based organisations have been granted a total of $200,000 under the Community Building Partnership program, with the amount of $100,000 going to Umina Beach Men’s Shed to build a permanent premise.

One of the other worthy recipients was the Peninsula Environment Group who was granted $12,000 for improvements at Woy Woy Peninsula Community Garden.

Back to you Ross.

Thanks David, well in breaking sports news, speculation is growing as to whether the New Zealand Warriors will make the Central Coast their home base for the remainder of the shortened NRL season.

The Warriors flew into Tamworth earlier this week for two weeks of quarantine and light training, but the club has made it clear that it does not intend to remain in Tamworth beyond the quarantine period and is looking to establish a base closer to Sydney.

In a zoom interview for the NRL, Warriors CEO, Cameron George, indicated a clear preference for the group to locate at the Central Coast.

A spokesperson for Central Coast Council on Thursday confirmed that the Council is currently in discussions with the Warriors to train at Central Coast Stadium.

And we close today with some help for anyone who has forgotten to do something nice for their mum on Sunday.

This clip, courtesy of … is a step-by-step guide on how to stay in the good books.

That’s all for now, please check out Coast Community News Issue 241 hot of the press today and full of these stories and many more as well as a really challenging sudoku.