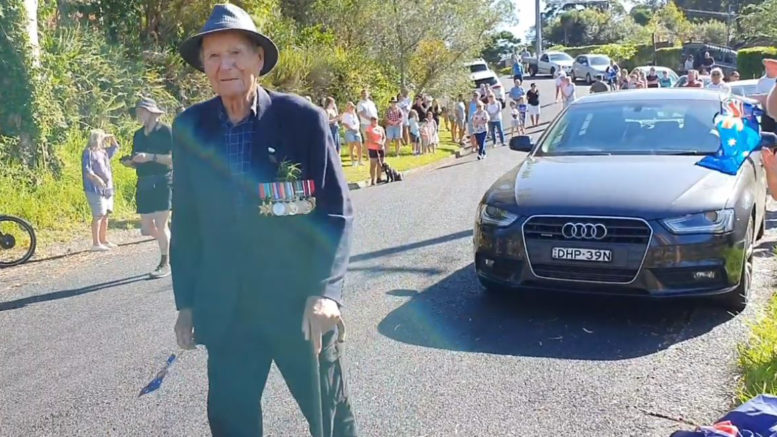 An Avoca Beach veteran was honoured with his very own parade when his neighbours turned out in force to celebrate his service on ANZAC Day.

With this year’s commemorative services outlawed under COVID-19 restrictions, the 96-year-old thought this would be the first year he’d be unable to march, until his neighbours held a parade in his honour.

Assembling on their driveways, the residents of Chapman Cres cheered, clapped and waved the Australian Flag as Jack marched down the street and back again.

The former bomb and mine disposal expert said he would be forever grateful to the Avoca Beach community for bringing ANZAC Day to life on their little street.

“I was blown away.

“A good friend had told me they’d organised a little something with 10 or so people and to put on my suit and medals, and when I came out, the whole street was there.

“It absolutely amazed me,” Jack said.

During his parade, Jack took the time to speak with several neighbours and to thank them for their support, and in the true spirit of Australian mateship, he was pleasantly surprised to learn that he wasn’t the only veteran on the block.

“There were two modern era former clearance divers in the crowd and an ex-army bloke who served in Iran and Afghanistan.

“Even the local Fire Brigade Captain, who is also ex-army, came out in full uniform with his medals.

“We never knew we were neighbours,” Jack said.

“It was special beyond all my dreams.”